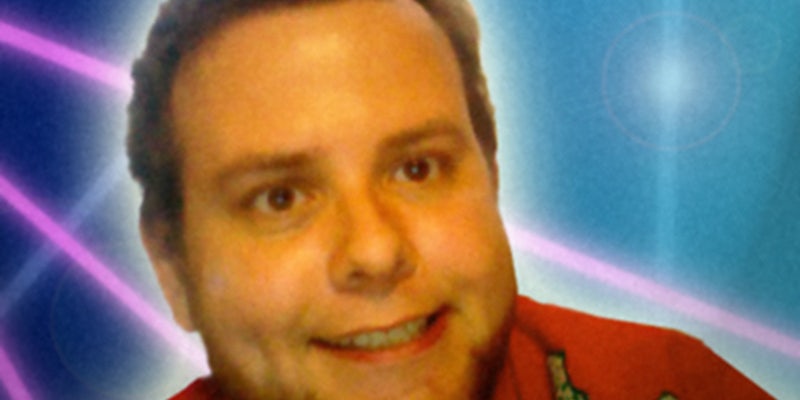 Christopher Price is Tumblr’s community manager. But his followers might not know that.

“I would imagine that a large percentage of my followers have no idea I actually work for Tumblr, which I’m okay with,” he told the Daily Dot.

It’s no wonder. Known to his followers as Topherchris, Price’s posts are anything but professional. He’s more likely to post a GIF of Oprah vomiting rainbows than a press release about Tumblr statistics.

However, this style of management—short on business, long on dinosaurs, gags, and GIFs— may be just what Tumblr needs. His popularity among users has prompted prolific journalist Josh Sternberg to dub him a “cult hero.” He’s got something that resonates with the Tumblr community, even if users don’t realize exactly who he is.

How much of a following does Price have, exactly? His average post usually nets 300 likes or  reblogs. However, he stays mum on just how many people are following his blog.

“Tumblr doesn’t publicly display follower counts by design, and I think this is important,” he said. “It sounds trite, but it’s really not about follower counts. I’m much more proud of the fact that I follow 2,001 people today, and still manage to add more every week.”

It’s just one of the ways that Price is immersed in Tumblr culture. The former programmer was a Tumblr user for several years before coming on board, and in a way, he said the way he uses the service hasn’t changed.

“As a user, I was trying to grow an audience by interacting with the community in fun, positive ways. I’m still a user, and that same goal is at the foundation of everything I do,” he said.

Usually, Price grows his audience by entertaining them. Aside from his primary blog, he’s created 178 other Tumblr blogs, many of which he still keeps active. His favorites include Pretty Colors, whatthefuckdoIneedtoknow and the ever trippy nrtnts. For Price, this is part of the job description for Tumblr’s community manager.

“I try to straddle both the community engagement side and the editorial side. To me, that’s really the core of what I love about Tumblr: the merging of community and content,” he said.

Since CEO David Karp invited him to join Tumblr in July 2009, Price said that although his Tumblr use has not changed, the Tumblr community certainly has. For one thing, it’s a lot bigger.

“There was the feeling way, way back in the beginning (however untrue this may have actually been) that you could know everyone on Tumblr. Today, my thinking has shifted to: somebody, somewhere is creating anything I can imagine using Tumblr,” he said.

Tumblr also has plans to expand internally. Recently, Karp announced Tumblr’s plans to found a journalism outlet exclusive to Tumblr stories. Price will take a role in it.

“Our community creates incredible work in every medium known (and a few as yet unknown), and we want to tell more of these stories to the world,” he said. “Definitely, I’ll be involved.”