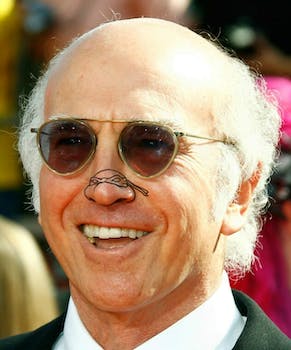 Want to know how your favorite celebrity looks like with a turtle for their nose? Wonder no longer!

Noses come in all shapes and sizes.

There are big ones, small ones, beak-like ones and, of course, there are also the rare Teenage Mutant Ninja Turtles noses.

A new Tumblr blog called Teenage Mutant Ninja Noses features photos of celebrities with small Ninja Turtle heads clevery drawn around the end of their noses. The bandanna and shape of the turtle head are drawn around the bridge of the nose while the nasal openings act as the mouth.

The digitally altered photos are inspired by the Teenage Mutant Ninja Turtles, a 27 year old comic book and hit TV series that features four bipedal turtles who talk, do karate, and eat pizza.

Celebrities like Justin Bieber and Christian Bale have been lucky enough to have a terrapin drawn on their noses. Altered photos of James Franco and George Harrison have been “liked” more than 9,000 times combined.

Teenage Mutant Ninja Noses follows in a long line of quirky Tumblr blogs dedicated to altering photos of celebrities. One of the most famous blogs is Selleck Waterfall Sandwich, which features doctored photos of actor Tom Selleck posing in front of majestic waterfalls with a variety of delicious sandwiches resting nearby.

But unlike the Selleck Waterfall Sandwich blog, the Teenage Mutant Ninja Noses have, for the most part, leave the photos of celebrities mostly unaltered.

The Daily Dot has reached out to the creator of Teenage Mutant Ninja Noses for an interview and is waiting to hear back.