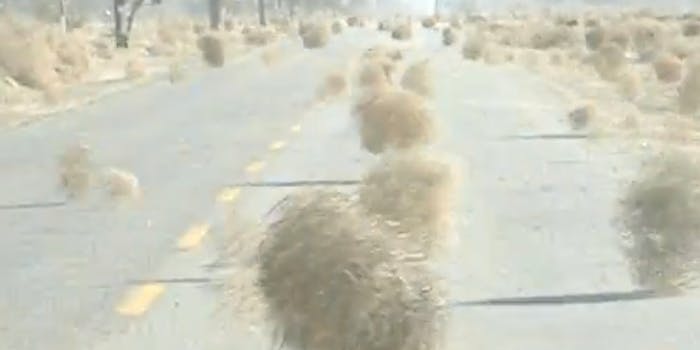 The most fun anyone has ever had watching rolling tumbleweeds

Life is strange out in the Mojave Desert.

A field full of tumbleweed, Jewel’s “You Were Meant for Me” on blast, and two maniacal kids who cannot get over themselves.

Life is strange out in the Mojave Desert.

Thanks to this 2007 footage unearthed by redditor DJ_Velveteen, YouTube gets a chance to climb inside the cabin of father Kurt Dahlin’s car as he and his family whip along 90th Street West in a small California town called Lancaster, located 70 miles north of Los Angeles.

The journey itself, described by Dahlin simply as “a drive in the Mojave Desert,” doesn’t sound that fun—the Jewel doesn’t make it any more thrilling, either—but there does happen to be an ungodly amount of tumbleweeds. And these two kids—brothers Aaron and Kyle—sound like two drunk girls who just dropped a pizza on the floor.

The yucks go on for the entire three minutes, and they’re most literally watching tumbleweeds roll by—an action synonymous with boredom.