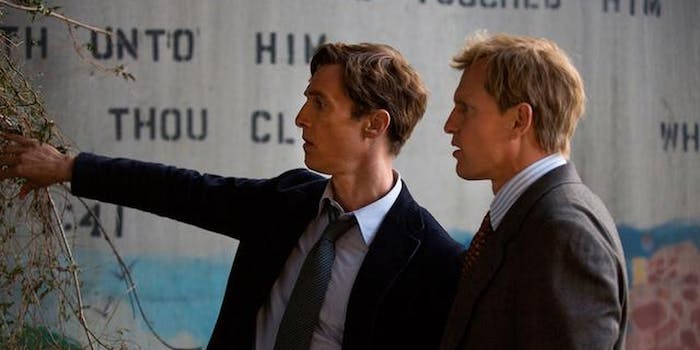 The literary allusions of ‘True Detective’ are not plagiarism

True Detective's Weird Fiction heritage is one of authors borrowing, playing in, and remixing one another's work.

Earlier this week, fansite editors Jon Padgett and Mike Davis got together to present a case that Nic Pizzolatto, the creator and Emmy-nominated writer of True Detective, is a plagiarist.

Citing a grand total of eight lines out of the entire first-season run of True Detective, Padgett and Davis attempt to make a case that Pizzolatto plagiarized one of the greats of Weird Fiction, Thomas Ligotti. What they don’t spend much time noting is the fact that True Detective directly quotes numerous other works of Weird Fiction along with Ligotti—which is exactly what it’s supposed to be doing.

Cultural conversations about plagiarism affect me directly, because when I’m not a journalist, I am an open and unashamed fanfic writer. As a writer of fanfiction, I have been called a white slaver, a pornographer, an identity thief doing “the devil’s work,” and, on a daily basis, a plagiarist.

While there have been many plagiarists in fandom, a few of whom who’ve gone on to have healthy careers as professional writers, fanfiction itself is not plagiarism. The entirety of fanfiction is a process of love and nurturing a pre-existing universe. It’s an expansion of someone else’s writing rather than an erasure, a tearing down.

What first drew me to Weird Fiction as a genre is its link to fanfiction. The phrase “weird fiction” was first used by HP Lovecraft to describe the specific weird and wonderful blend of horror and fantasy he and his small school of fellow writers were engaged in. Lovecraft himself was not the first person to write in the style of what would also be thought of as Lovecraftian fiction. But he was the first to typify it.

One of the characteristics that Lovecraft typified about the genre as a whole was that it was a fluid space, a fictional playground where anyone could show up, grab a theme or a phrase or an idea from one of Lovecraft’s works, and run with it. Writers in the early Weird Fiction circles created fanfiction of one another’s stories as a matter of course, sometimes using and re-using lines from previous weird stories.

In this way, the key parts of True Detective‘s mythology were passed down from the 19th century to the 21st. When Pizzolatto writes, “Time is a flat circle,” he’s not just referring to the internal narrative of the show, but to the way that he himself is deliberately and knowledgeably reviving the Great Old Ones—in this case, Lovecraft and his predecessors—to speak to us once again.

It starts with the legendary literary figure Ambrose Bierce. In 1891, Bierce penned the short story “An Inhabitant of Carcosa.” That story gave us the mythical place name that winds itself through True Detective like a red skein of love. But that story also gave us this passage:

Looking upward, I saw through a sudden rift in the clouds Aldebaran and the Hyades! In all this there was a hint of night — the lynx, the man with the torch, the owl. Yet I saw—I saw even the stars in absence of darkness. I saw, but was apparently not seen nor heard. Under what awful spell did I exist?

The experience the titular inhabitant of Carcosa describes—of seeing black “stars in the absense of darkness”—is one that later showed up in another cultural work you might be familiar with: 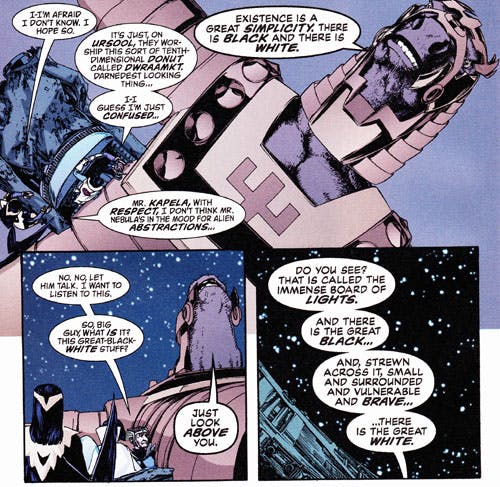 When Pizzolatto had Rust Cohle quote Alan Moore’s comic Top Ten almost verbatim in the final episode of the season, he knew exactly what he was doing, and he also knew that Moore himself, who referenced everything from The Three-Penny Opera to Bierce in his works, was trading off the same long-standing practice of allusion, homage, and remixing that serves as Weird Fiction’s calling card.

It’s the same remix culture that Lovecraft himself was a proponent of, the same culture that fandom thrives in today. It’s a culture that Padgett and Davis make no notice of in their attempt to spell out why they feel Pizzolatto plagiarized for those eight lines, and those eight lines only—but not when he borrowed “Carcosa” from Bierce, or “The Yellow King” from Robert Chambers, or the Earl King from Germanic folklore, or the superhero comic Daredevil, or Twin Peaks.

Oh, and it’s the same culture that Thomas Ligotti was participating in when he referenced Bierce’s black stars himself in his short story “Teatro Grottesco:”

The Cambridge definition of plagiarism, from which Davis and Padgett quote, addresses the issue of whether the accused plagiarist intended to deceive.

But it does not address the intent to be transparent—the intent to boldly take your place in a literary circle and join hands across a century-wide and ever-expanding ring of horror writers who have been referencing each other’s works the whole time.

In this case, the transparency lies in the title of the show itself. True Detective lay clues at the feet of its fans, and those fans responded by becoming detectives themselves, scouring the Weird Fiction pantheon for quotes, allusions, and hints as to the patchwork quilt of references Pizzolatto had assembled.

The earliest reference (of many) to Ligotti on Reddit’s True Detective subreddit appeared on January 27, the day after the second episode of True Detective aired, in a discussion about how Ligotti and his short story “The Conspiracy Against the Human Race” were clear influences on Cohle’s philosophy.

The fans who dug up these references behaved as they were meant to, and so did True Detective: it functions exactly how a work of true Weird Fiction is supposed to, as an expansion of the endless (literary) horror that has come before it.

It seems mind-boggling to me that Davis and Padgett, who are both Weird Fiction fans, failed to acknowledge the literary context in which Pizzolatto was writing.

But then, they also deliberately twist their description of the citation that Pizzolatto did do. First, they claim that Pizzolatto never actually referenced or cited Ligotti as a source anywhere in the leadup to True Detective. This isn’t true; he did an entire interview about Ligotti’s influence on his work here in the Wall Street Journal. So they bring up that interview and attempt to discredit it with another interview in which they charge Pizzolatto with being “evasive.”

On the contrary. Here’s what Pizzolatto said in the WSJ, in which he brings Ligotti up on his own, at the very first opportunity:

Speakeasy: If you could recommend any single work of weird fiction and/or horror to people, what would it be?

Pizzolatto: That’s tough — on the one hand I want to name one of the blue-chip classics, and on the other I’d like to give an endorsement to people who may not usually get enough attention. I mean, I’d suggest Lovecraft or Poe, but everybody knows them already. More recently, I’d point people in the direction of Thomas Ligotti, Laird Barron, John Langan, Simon Strantzas and others. For fans of the show who’d like to see what contemporary voices have done with Chambers’ “King in Yellow,” I’d point them toward Karl Edward Wagner’s short story “The River of Night’s Dreaming” or the recent anthology “A Season in Carcosa.”

When did you first hear of and read Ligotti?

I first heard of Ligotti maybe six years ago, when Laird Barron’s first collection alerted me to this whole world of new weird fiction that I hadn’t known existed. I started looking around for the best contemporary stuff to read, and in any discussion of that kind, the name “Ligotti” comes up first. I couldn’t find any of his books in print, and their used prices were prohibitive for me at the time. But I located a couple at libraries, and his nightmare lyricism was enthralling and visionary.

And here’s what he said in his interview with Arkham Digest’s Justin Steele, the one where he was supposedly so cagey:

Sure. That influence is, like everything in True Detective, part of a whole-earth catalog of cultural obsessions, including my own.

Again, Pizzolatto immediately acknowledged that he was homaging Ligotti, along with the entire pantheon of Weird Fiction at his disposal. In other words, Ligotti is just one of the many recipients of Pizzolatto’s Weird Fiction group hug. Pizzolatto said as much himself in avidly denying that anything in True Dective is plagiarism.

But Pizzolatto’s acknowledgment to his own depth to Ligotti isn’t the only thing that Davis and Padgett distorted. As a footnote at the end of their long tirade, they throw out the scathing note that “Noted instances of plagiarism in the literary world far less offensive than Pizzolatto’s have resulted in lawsuits and public humiliation directed at the guilty plagiarist.”

Their citation here is to the notorious incident in which a 17-year-old girl named Kaavya Viswanathan received a widely publicized publishing contract and was then discovered to have plagiarized the majority of her book, including its plotline. Viswanathan directly quoted writers ranging from Salman Rushdie to Meg Cabot, including one passage that was a 14-line-long straight lifting of the work of another chick lit and Young Adult writer, Megan McCafferty.

Davis and Padgett apparently think that Viswanathan’s piecemeal theft of McCafferty’s work is “far less offensive” than the eight lines of dialogue that Pizzolatto openly acknowledged was a homage to Ligotti. I guess when a female writer plagiarizes another female writer, it’s just not as culturally important, huh?

Viswanathan later confessed that she was guilty of allowing the “unconscious influence” of those other writers to affect her own writing.

There is nothing unconscious about what Pizzolatto is doing in True Detective. Literary remixes may not be as immediately recognizable and understandable as the auditory remixes that are firmly covered by the Fair Use clause of U.S. copyright law, but they are still valid literary tricks. Likewise, screenplays may not have the liberty of slapping a footnoted citation on every homage they weave into their vision, but that doesn’t make their homages any less intentional or transparent.

True Detective is not a work of plagiarism. It’s a remix by a man who was clearly transparent about what he was doing, a man who is very aware that it’s what Weird Fiction has been doing all along.

All Padgett and Davis did in failing to recognize this was uninvite themselves from the group hug.

Step away from the circle, guys. I hear Diana Gabaldon’s looking for new friends these days.