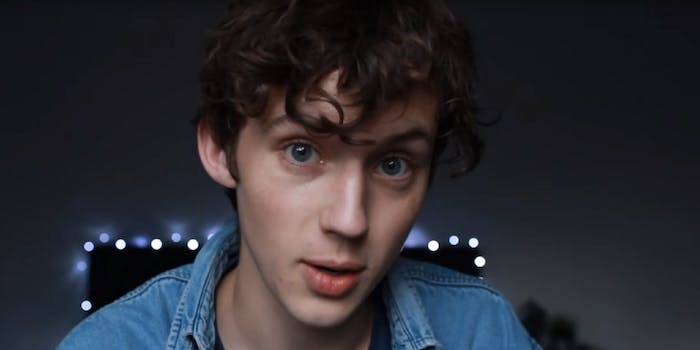 The tour is slated to continue in Europe next week.

Midway through YouTuber Troye Sivan‘s first international music tour, the Australian singer had to cancel hometown performances due to sinusitis and acute laryngitis.

Sivan announced the cancelations on his Tumblr, under the title “I am sad.”

Nothing could make me sadder than what I’m about to say. I’m really unwell and apparently, as I’ve been told by the 4 doctors I’ve seen in the last 24 hours, I have had acute laryngitis which has gotten much worse and now developed sinusitis, leaving me too sick to sing.

thank you everyone for being so nice, don't know what I did to deserve you guys 💙💙💙

Sivan, who’d never been on tour before, said he’s been loving the chance to connect with his fans in person.

“It’s so cliched, but literally just like every nerve and every concern or worry or stress completely went away when I stepped out on stage,” Sivan told the Daily Dot after his first tour date in Seattle in October.

The tour is slated to continue in Europe next week, starting Nov. 19 in London. Sivan said he and his team are figuring out when they can reschedule the Perth and Sydney shows.

In the meantime, Sivan is appeasing fans by releasing a new track from his forthcoming Blue Neighbourhood album. “Youth” is playing on radio stations across the world today, and Sivan has slowly been previewing tracks both on tour and on his YouTube channel.

Blue Neighbourhood, an extension of his popular EP Wild, comes out Dec. 4.