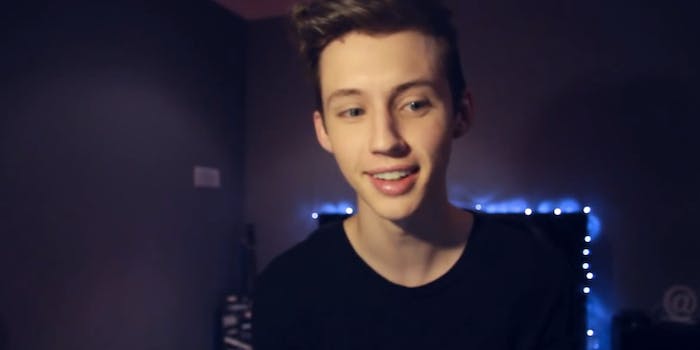 YouTuber gets dark with debut single.

After announcing his forthcoming album at VidCon last month, YouTuber Troye Sivan gave a taste of his first track, “Happy Little Pills” to his adoring fanbase. Now he’s revealed the full single in a quest to be the next digital star to emerge on the music scene.

Sivan took to Tumblr to leak a SoundCloud link of his debut track, a mix of haunting beats and electronic flourishes. The song definitely goes for a more mature and darker tone than some would expect from the 19-year-old YouTube star. In a style that evokes Lana Del Rey with more dance and pop production, Sivan sings about “cocaine dollar bills” and “sipping life from bottles.” In his post he explains that he wrote the lyrics “during a bit of a rough time for someone super close to me, and for myself.” So far, the response from fans and fellow YouTubers alike has been overwhelmingly positive, and has already inspired covers after less than a day on the Internet.

Stop what you’re doing and listen to your new favorite song, #HappyLittlePill by @troyesivan: http://t.co/aKdXbqyh5e RT if you’re obsessed.

@troyesivan Your new song is EVERYTHING!!!!!!!!!!!! Have it on repeat & dancing in my bra and panties on my bed in slow motion BRB

I JUST LOVE HOW TROYE SIVAN LITERALLY LEAKED HIS OWN SONG

Sivan himself was overwhelmed by the love and took to Twitter to thank his spporters.

the world is a rad place sometimes. wish i could show 13 year old scared, closeted troye who just wanted to perform all of your tweets

‘Happy Little Pills” goes on sale Friday, July 25, and will feature on his debut album, Trxye, out Aug. 15.