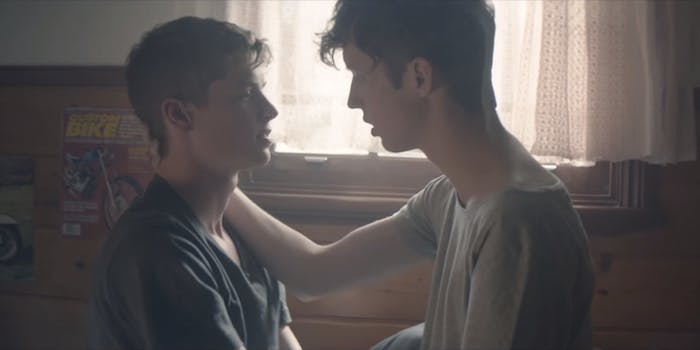 The 'Blue Neighbourhood' trilogy could be Sivan dipping a toe into the visual album pond.

Visual albums are all the rage, and it looks like Troye Sivan might be experimenting with one in the teaser for a trilogy of narrative music videos around his new album, Wild.

Sivan is one of the most successful recent YouTube-to-music crossovers, generating mainstream press as an artist to watch. TRXYE, his first EP, debuted at No. 5 on the Billboard charts, and the video for “Happy Little Pill” has more than 16 million views, surpassing many other YouTubers who’ve turned to music.

There’s little information about the Blue Neighbourhood trilogy beyond the 15-second teaser Sivan released on Aug. 20 to coincide with Wild pre-orders. The clip ascribes to Sivan’s gauzy video style, cutting between images of children playing, an older man drinking, and two boys—one of whom is played by Sivan—alternatively arguing and becoming intimate.

“Blue Neighbourhood is a trilogy of music videos that accompany WILD, and is very very close to my heart. this whole project has been such a dream come true for me, and i hope you all love it as much as i do. love is love, yo,” wrote Sivan on the YouTube page.

Wild will be available Sept. 4.