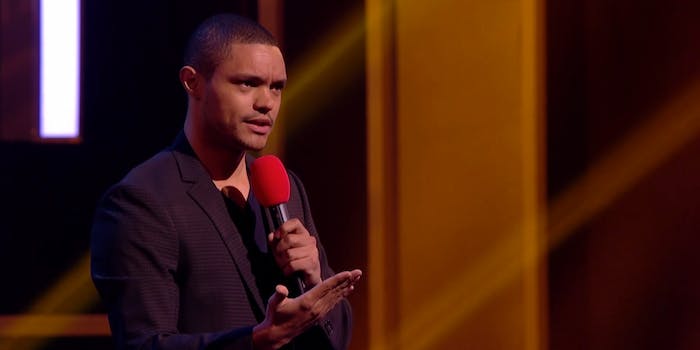 Everything you need to know about Trevor Noah, your new ‘Daily Show’ host

He already had quite the résumé before joining 'The Daily Show'.

To many of the people who woke up to the news that correspondent Trevor Noah would be taking over for Jon Stewart, Noah is a virtual unknown. But the South African comedian is a star in his own right outside of the U.S.

The 31-year-old has been on the South African soap opera Isidingo; hosted an educational show, a talk show, a gossip show, and awards shows; and even had his own radio show, called Noah’s Ark—making the joke a decade before Twitter’s comedians. All of this was before he made his American television debut on The Tonight Show in 2012 when Jay Leno was still at the desk. At one point he sold a pilot for a TV show based on his life to Fox. Oh, and he speaks six languages.

We’re bound to see much more of Noah in the upcoming months, but until then, let’s get to know him and his work a little better.

1) His stint on The Daily Show

As Business Insider pointed out, Noah has only appeared on The Daily Show as a correspondent three times. Nevertheless, his Daily Show material is a good place to start learning about him. All of his appearances are worth checking out, but let’s start with Noah’s take on the lack of coverage surrounding Boko Haram and the thousands of people the group killed while the rest of the world paid attention to the attack on French satirical magazine Charlie Hebdo.

Noah made his U.S. television debut two years before Stewart hired him, and he made history as the first South African comedian to perform on The Tonight Show and The Late Show. In both instances, he was there for his standup comedy.

3) He has a comedy special you can watch right now

Noah is among the many comedians working today who has his own comedy special. Trevor Noah: African American aired on Showtime in 2013. Noah’s humor touches on racism, culture, and growing up in South Africa as the child of a mixed-race couple when apartheid made that illegal. You can stream the special on Netflix.

4) He’s the star of a documentary

For the 2011 documentary You Laugh But It’s True, a film crew followed Noah and documented his unique comedic perspective as he prepared for his first one-man comedy show. The documentary showcases the South African comedy scene, gives viewers a glimpse into a darker time in the country’s history, and offers another layer to Noah’s personality.

Noah sat at the host’s desk while Eugene Khoza played sidekick as they talked to other comedians in a makeshift studio back in 2012. Most of the set may have been made of cardboard and the audience cheers came from a sound effects machine, but they made it their own.

We don’t know whether he’ll ever be in a Comedy Central roast in America, but on the South African version, he’s shown that he’s already an old pro at it. Watch him take some jabs at South African musician Steve Hofmeyr and his fellow roasters, showing that he’s not afraid to ruffle some feathers.

7) He performed standup for charity

Earlier this month, Noah did a special performance for Red Nose Day 2015. Some of the themes in his earlier work were still present, but in this routine, he spent plenty of time making Ebola funny, comparing airport security’s attitude toward the disease to asking about one of his relatives.