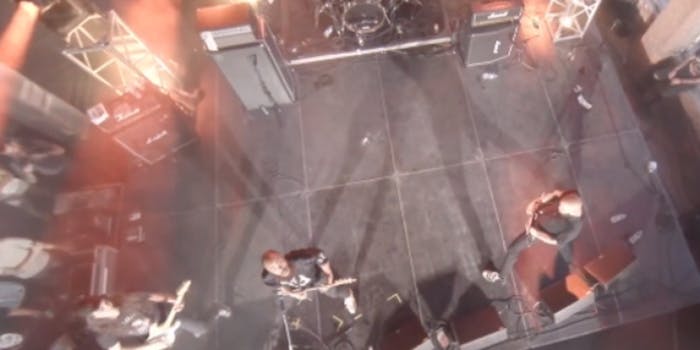 The issue of when and where you can fly a drone has been passionately debated, but flying drones at punk shows is still very wild, uncharted territory.

Drone pilot Harry Arnold learned this the hard way, when punk band Trash Talk played an indoor skateboarding competition in Detroit on Aug. 9. Arnold runs an aerial photography and event-streaming company called Detroit Drone, and claims he was hired to film the show. During Trash Talk’s performance, the drone flies over the crowd. Bassist Spencer Pollard caught sight, and heaved three drinks at it.

Arnold posted the footage to YouTube after the incident, and told MLive that though he and Pollard exchanged words, it was a “rebel moment,” akin to “Ozzy Osbourne biting the head off a bat.” He’s being reimbursed by the promoter for $700 in damages.

This joins the new tradition of people throwing things at drones. Is that a Tumblr yet?