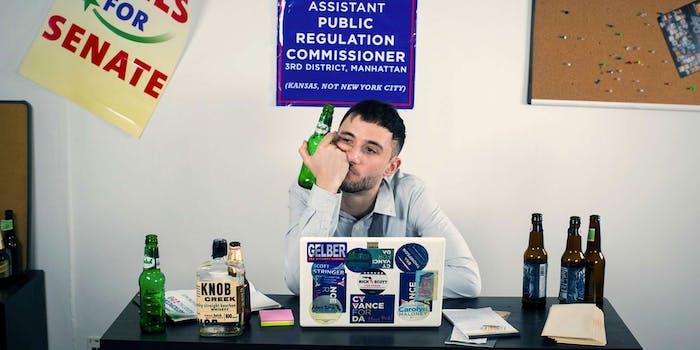 ‘Trailing’ brings out the humor of working in politics

In the new webseries Trailing, creator Steven Phillips-Horst plays Steven, a man working an election campaign for the “Queens Commissions Commissioner,” among others. His boss (played by Joanna Bradley) doesn’t understand social media. She asks Steven to “crowdstorm” ideas.

Five episodes in, Trailing certainly has shades of Veep, but its comedy doesn’t skewer Washington politics. Its comedy is in Steven’s befuddled expressions as he attempts to navigate his boss’s crosshairs and the Post-It note-cluttered office life. Bradley is fantastic as his wound-up boss, and it’s a refreshing switch-up of gender roles, especially when she fawns over fellow staffer Agnes (who “took a journalism class once”) while dismissing Steven’s ideas.

Phillips-Horst, who also stars in the Monica webseries, told the Daily Dot he would describe his character as “a younger, hotter Liz Lemon.”

Trailing pulls from Phillips-Horst’s real experience working for New York City politicians like Cy Vance and Bill de Blasio circa 2012, before he was mayor. He relates that he taught de Blasio’s wife how to tweet, drafted fundraising emails, and was part of a team that was “notoriously disorganized.”

In the press materials for the series, he writes that “Politics can be a hollow business, more reflective of the hacks who toss around boiler-plate copy like it means something than the dreams of earnest activists or the promise of enfranchising the voiceless. However, I still love the horse race—and I cherish the breathless reporting of Politico. But in the foyers next to the elevators that lead to the hallways just adjacent to the corridors of power, there is a certain remove from reality. I found it to be endearing, funny, sad, and real.”

The show’s main character is also gay, and in the same press materials, Phillips-Horst explained that he hopes Trailing is “not like Looking, or The Outs, or any other show that asks us to congratulate a gay filmmaker simply for accurately reflecting the insecurities and banalities of modern homosexuality.”

“I have not had a nighttime dream about a Bill Clinton beej,” he explained, “but I have had many, many fantasies about the following politicians: Marco Rubio, Scott Brown, Francois Hollande, Boris Johnson, Elizabeth Warren, Genghis Kahn.”

Episodes 6 and 7 of Trailing come out tomorrow, May 11.