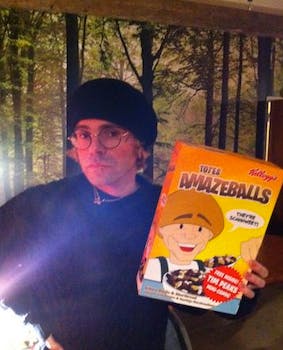 The squeaky tweeter gets the breakfast cereal.

When Tim Burgess tweeted he wanted “Totes Amazeballs” cereal, he probably wasn’t expecting a box of the nonexistent cereal to arrive in his pantry. But Kellogg’s UK had a different idea.

The Charlatans lead singer tweeted that a mixture of Coco Pops, marshmallows, bites of shortbread, and raisins would make the perfect cereal. The singer told NME, a British music publication, that the phrase sounded like something fictional confectioner Willy Wonka would have said. (If you are unfamiliar with the origin of the phrase, iIt is Millennial English dialect for “totally amazing.”)

Brugess, whose approachable appeal on Twitter makes him a must-follow, told the Manchester Evening News that he sent a “cheeky tweet” to Kellogg’s about his new cereal idea not expecting a response. An hour later, Kellogg’s UK responded that they’d create it just for him.

“Totes Amazeballs—They’re Schhhweeeet—thanks @kelloggsuk,” the singer tweeted to his 21,000 fans upon the cereal’s arrival. His fans will have a chance to try it out at an English music festival in late July.

The hashtag #TotesAmazeballs gained traction on Twitter with fans congratulating the singer for his creation.

“This is what I want to eat every morning from now,” tweeted Laura Cowdrey.