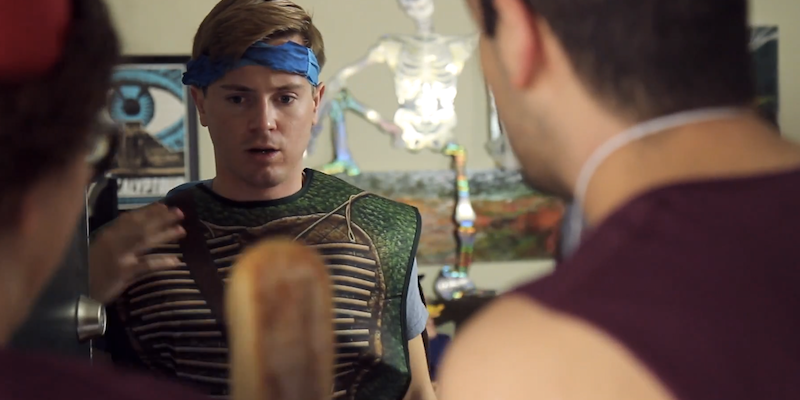 Here’s why I decided to act, topless, in a YouTube comedy video

I have one line: “Sorry, I dropped my loaf of bread.” I’m nervous about it all day.

I’ve been in Los Angeles for only a year, and today I make my acting debut topless in a YouTube video.

Technically, that’s a bit of a stretch. I only appear to be topless. I’m actually wearing a nude bra that covers the same amount of skin as any swimsuit, but the video effect is meant to imply that I’m sans shirt with a blur. It’s what every family fears when kids move to California to “make it.”

As part of my job covering the wild world of YouTube, I’m trying to immerse myself in aspects of the YouTube community to really understand what its creators and fans are like. I’ve started making my own vlogs with varying success. My next stop on the learning ladder was what it’s like to take part in a scripted video. YouTube comedians the Tin Can Brothers were kind enough to entrust me with a bit part in their Halloween sketch. I arrived and was shuffled into wardrobe (the bathroom) to have my big moment.

The first thing I notice is that there’s a lot of down time. I get into costume, and then sit on the couch for a while making small talk with the other half-naked actors. Everyone here is volunteering their time to the video, and we sign a document that agrees that we won’t seek compensation now or in the future if this video happens to go viral. No one is cautious about this, since we’re doing the video out of the goodness of our hearts.

Joey Richter and Brian Rosenthal, two-thirds of the TCBs, serve as directors. It’s way less haphazard than my teenage days shooting video in the backyard for “fun,” before the world of YouTube could have made me a star. There’s a detailed shot list that works back from a  full house of characters all the way to simply the main characters. Corey Lubowich, the missing TCB, mans the camera.

The premise is this: A newbie to LA is throwing a Halloween party and is increasingly shocked when his guests start showing up in costumes without pants (the boys) or tops (the girls). Of course, all the costumes are authentically costumes you’d wear without a top or pants. After the host has gone completely insane, there’s of course a twist that I won’t spoil.

My role was Aladdin, who never wears a shirt, and who shows up to the party with her  totally naked date, Abu. I have one line: “Sorry, I dropped my loaf of bread.” I’m nervous about it all day. The rest of the cast acts professionally, and I am (fake) topless holding a giant baguette and sweating. The first half of the shoot is mostly me doing reaction shots in the background, and I come up with an improv where I hold the baguette over my date’s blurry parts that I think works pretty well. When it finally comes time for my entrance and line, I get a lot of notes about how high to hold the baguette for the camera angles, and only two takes to nail it. I can admit I’m the weak link actress when watching the video back (what was my motivation? I should have gone method!), but I’m just proud I said my words and didn’t fall down.

I stick around after my shots are finished to watch the final scenes. Things move incredibly faster, and the actors involved (in particular the party host Casey Hanley and two other key players, Devin Lytle and Liam White) are impressive to watch, reworking takes and adding different emotions or objectives at the behest of the directors. I even make myself useful by guarding the set during the crucial final shot (no spoilers!) and get to celebrate with some chicken donated by the  team’s friendly neighbor. To look at the final product, it’s hard to believe this was shot with just a few lights, a single camera, and someone’s living room. While the barrier to entry is higher than a vlog, shooting something scripted that looks professional is way more attainable than you might assume.

Of course, now I have to let my parents know that their daughter is making her faux topless debut on the Internet. That’s the difficult part.