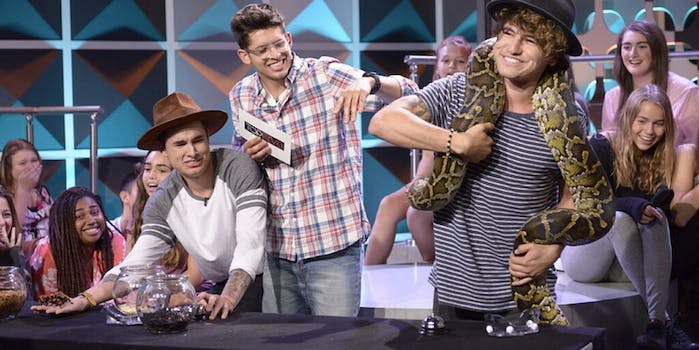 At its core, Top Five Live is a top five countdown of the best videos of the day, as voted on by fans. It’s Total Request Live for a generation too young to remember TRL, but for viral clips instead of music videos. But because the show shares videos that fans can already get on their smartphones with a click, Top Five Live has to do a little more to earn that click.

“I like [TRL] but I honestly feel like our show—and again, this is biased because it’s my generation—but this show feels so much more connected to a home audience,” said host Hunter March. “They were delivering something that nobody could get elsewhere. Music videos weren’t available online. We’re delivering something you can get online, but the way we deliver it is what people come for.”

As for that particular delivery method? Well, the daily countdown show doesn’t always include spiders, snakes, and worms, but it made a special exception when YouTubers Jc Caylen and Kian Lawley stopped by.

“I really don’t know what I’m expecting,” Lawley told the Daily Dot before their episode taped. “I’ve never had to deal with tarantulas and snakes. I’d much rather deal with pain. This is going to be a mental pain.”

Once the animals were on stage, Lawley, who kept losing challenges and having to subject himself to more creepy crawlers, drew the line at a snake and passed it off to Caylen.

“We didn’t even know what we’re signing up for,” laughed Caylen. “We did make a deal, because he hates snakes and I hate spiders.”

Adrenaline was probably high for the stars, but the taping pace for a Top Five Live episode can feel manic too. About 20 teenaged audience members file in, and host March jumps right into a 10-minute episode recapping the best videos. Even when an episode is not for the same day, the pace is faster than a traditional TV set. In lieu of an applause sign between segments, a producer swings a rubber chicken in the air to cue the crowd. During the show fans stretch to be in the selfie moments, which are broadcast immediately from March’s phone to the screen for the audience’s viewing pleasure. They also line up afterwards for individual selfies with the guests.

Connor Franta, who said he’s a little too young for the TRL that inspired the show, used his appearance on the program to plug his birthday charity fundraiser for the Thirst Project, and he played a game of identifying his Instagram style just by the pictures (he won, hands down). For YouTubers who are used to having a chance to edit themselves, doing a live show is a welcome break.

“I feel like it’s a fun atmosphere,” he said. “It gets into who you really are. I won’t be perfect at all; I’ll mess up my words and make weird noises, as opposed to a YouTube video.”

Franta’s episode is available on YouTube, but the rest of the series has moved to Go90, Verizon’s new app that just moved out of beta and to the general public. In addition to trying to win viewers for videos that already exist in the digital ecosystem, the show faces the added pressure of winning people over to a new medium, so Top Five Live has its work cut out for it in the coming months.

“I feel like we have an extra burden on us to make it that much better,” said March.