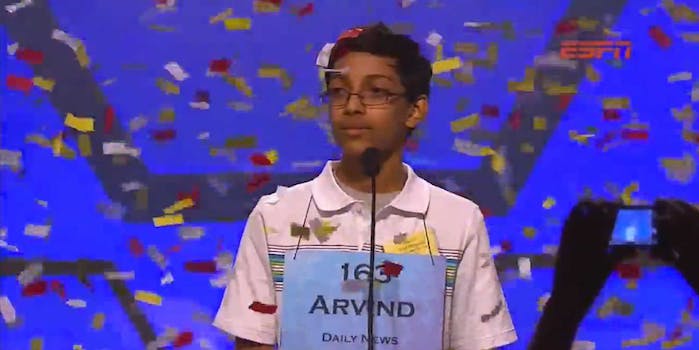 To mark Bee Week, here are the best highlights from YouTube.

Could you use that in a sentence?

281 spellers from around the country competed over the course of three days at the annual Scripps National Spelling Bee this week, each vying for the chance to become the Spelling Bee Champion. After a series of intensive testing (which included two computer-based tests), 13-year-old Arvind Mahankali emerged as the winner as we tuned in to watch these kids spell words we didn’t even know existed.

But it’s not always about the winner.

Children are put in the national spotlight during Bee Week—many of them for the first time—and what they’ll do is never predictable.  Whether it’s misspelling a word, mishearing the pronunciation, or missing the word completely, some of the better moments over the years have been the ones unplanned.

Here’s our look at some of the best moments in Bee history on YouTube.

Mahankali had finished third in each of the past two spelling bees, but this time he was victorious. After clinching the title by spelling the word “knaidel,” the confetti dropped down on him where he stood still and took the moment in.

Spelling Bee semifinalist Caleb Miller didn’t make it to the finals of the Scripps National Spelling Bee, but he revealed that he can imitate Smeagol’s voice from the Lord of the Rings trilogy, and even spell out the creature’s favorite word.

Sriram Hathwar was charged to spell the word “catachresis.” After asking the judges for the definition and the word in a sentence, one judge used Tobias Fünke as an example. Catachresis is the “use of the wrong word for the context,” so Arrested Development fans can attest to its accuracy.

For 2007 Spelling Bee Champion Evan O’Dorney, the most-watchable moment came after he claimed the title. In an interview with CNN’s Kiran Chetry, the winner (who is autistic) corrected the pronunciation of his name, told her to ask his mom what she thought, and noted that he wasn’t surprised at his win.

Chris’s word was “heron.” He then spent the next two minutes asking the judge to repeat the word and said just about every other word that remotely sounded like “heron” before spelling it correctly. He insisted that he wasn’t trolling, but rather he couldn’t hear what the judge said in the first place.

The judges gave eighth grader Sameer Mishra the word “numnah,” but he initially heard something similar (and more insulting), which got some laughs from the crowd. Upon clarification of the word’s pronunciation and that he and the judges weren’t insulting each other, Mishra’s relief is apparent.

According to the video’s description, neither Andrew Lay nor the judges pronounced “negus” correctly, and his discomfort showed as he asked for the word to be repeated. He was shocked to find out he nailed the spelling by sounding it out.

If YouTube had been around when Rebecca Sealfon won the Scripps National Spelling Bee in 1997, she would have been a viral hit. Her “elaborate rituals” kept people watching during the earlier rounds. It was her enthusiastic spelling of “euonym” that won her the title, and even the commentator couldn’t keep his composure.