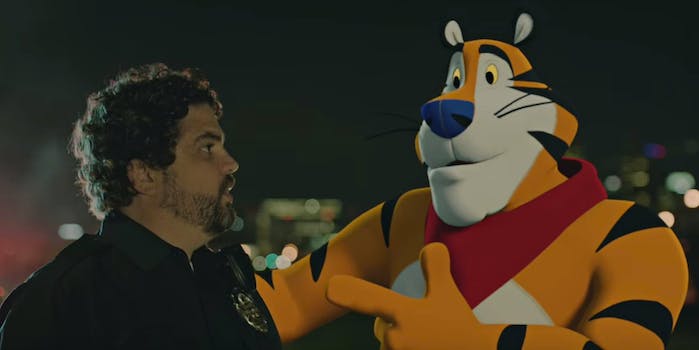 How can he help?

We talk a lot about things we see on the Internet “ruining” our childhoods, but a series of fake ads featuring Tony the Tiger are taking aim at adulthood.

But these videos aren’t easy to watch.

We see him with a sex worker, cops who are brutally beating a woman, and a suicide bomber. “Like the kids he used to help, he doesn’t know what to do,” an ominous voiceover explains.

As Death and Taxes noted, TonyIsBack.com is allegedly registered to a Finnish artist named Jani Leinonen. In 2010, Leinonen was involved in the abduction of a Ronald McDonald statue from a Helsinki McDonald’s, which led to the Free Ronald movement. His other works have mocked Cap’n Crunch, Burger King, and, yes, Kellogg’s, so it’s not hard to draw a line to the new Tony. He has not publicly confirmed his involvement.

Choice is yours! #kiasma #tottelemattomuuskoulu #kelloggs

The social media accounts for the Tony campaign have been disabled per Kellogg’s request, but the videos haven’t been taken down yet. The company told Ad Week that the “website and video have absolutely nothing to do with Kellogg.”

The initial pitch claimed Tony would be helping 10 adults with their problems, but a note on the Tony Is Back website says that mission is “suspended for now.”

We’ve reached out to the creator(s) and will update if and when we hear back.

H/T Death and Taxes | Screengrab via Tony is Back!/YouTube