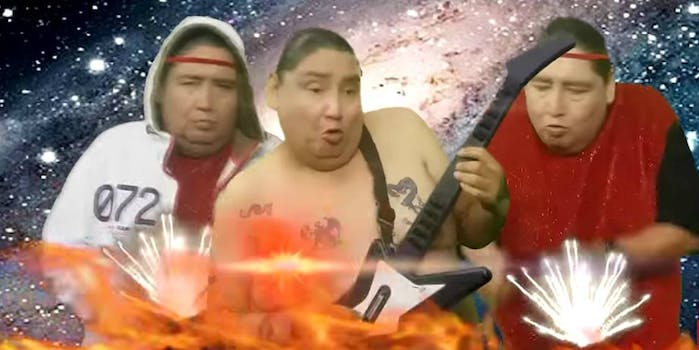 If you’re going to cover System of a Down’s “Chop Suey!” it’s always better to go as strange as possible. The stage antics and screaming of guitarist Daron Malakian combined with the uncommon vocal patterns of singer Serg Tankian make the band an unusual one in the world of heavy metal, and if you’re going to take the song and make it yours, it’s your duty to stretch the limits of metal elasticity.

But the video below is beyond peculiar. Uploaded to YouTube in December, it’s caught fire on Reddit in the last few days because of its, um, bizarre nature.

The “Chop Suey!” cover is performed by a musician/satirist named Abelardo Gutiérrez Alanya, AKA Tongo, who was described by one Spanish YouTuber as “the worst singer in history.” As Peru 21 notes, Tongo sings in “Tonglish,” which is apparently his unique take on how English sounds to him.

And it is … something.

Just for reference, here are the actual lyrics for the first 80 seconds of the song.

That, of course, is not exactly how Tongo sings the synth-pop version of the song (that somehow eventually becomes a huayno song), especially when his version of “in my self-righteous suicide, I cry when angels deserve to die” turns out to be “en may selfo radio suisay, ay crey guen enyal destu tu.”

As one redditor pointed out, Tongo “is Peru’s version of Weird Al. Except if Weird Al had influences in Huayno and cumbia music. No, he does not speak English. No, he doesn’t care to try, that’s the point.”

That’s clearly true if you happen to check out the rest of Tongo’s YouTube page, which includes covers of Guns N’ Roses’s “Sweet Child O’ Mine” and The Beatles’s “Let It Be.”

But this System of a Down takeoff is almost unimaginable. It’s either the best cover song you’ve heard or the worst. Either way, there’s almost no space between the two extremes. Which, when you think about it, makes Tongo kind of a genius.