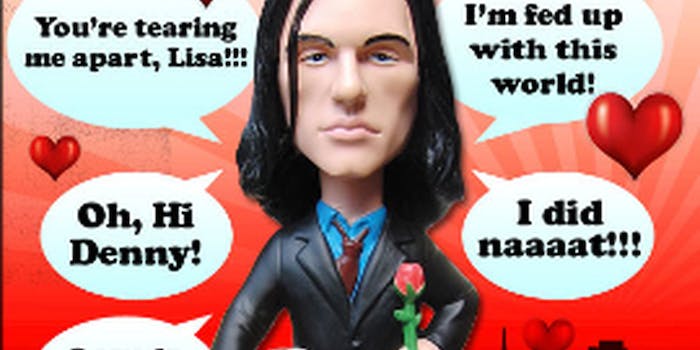 Wiseau's Twitter continues his unique brand of madness, with such gems as "You will be very close to my bottom" and "Persivistance pays off."

What do you do after you’ve taken the world by storm, produced a massively popular cult movie, and spawned endless debates about whether your brand of clueless Eurotrash kitsch is secretly self-aware or just really really bad?

That’s what we were delighted to discover Tommy Wiseau, noted auteur director of 2003’s bizarre melodrama The Room, had done.

Since the film came out, fans have been divided over whether The Room, a movie so bad it must be seen to be believed, was the work of an oblivious idiot or a clever trick by a man determined to troll everyone and getting the last laugh after all.

Now Wiseau’s Twitter continues the inexplicable madness, with such gems as “You will be very close to my bottom” and “Persivistance pays off.”

Produced, written, acted, and directed by the notably stringy-haired and largely incoherent Wiseau, The Room is widely considered one of the worst films ever created. Its notable features include an inexplicable plot, awkward-acting characters who appear and disappear without explanation (because members of the cast kept quitting), blurry camerawork, plenty of odd soft-porn scenes, and @Horse_ebooks–worthy dialogue (“Leave your stupid comments in your pocket!” and “If a lot of people love each other, the world would be a better place”).

Wiseau reportedly spent more than 1 million dollars to finance the film, which became a cult hit once noted Hollywood types like Veronica Mars creator Rob Thomas discovered it and started promoting it in their own circles.

In the wake of The Room‘s cult success, Wiseau did a number of guest comedy spots, starred in the brief comedy horror spoof The House That Drips Blood on Alex (sadly, written by someone else), and produced his own series of YouTube videos in which he shares his worldly wisdom about everything from kissing to method acting to Citizen Kane.

Recently, Tumblr discovered Wiseau’s Twitter account. Followed by a none-too-shabby 18,000 people, it’s unverified, but we want to believe. It’s full of Wiseau-flavored observations and technical f**k-ups—basically, exactly what we’d expect from the man who shot his own movie twice because he couldn’t figure out how film worked. 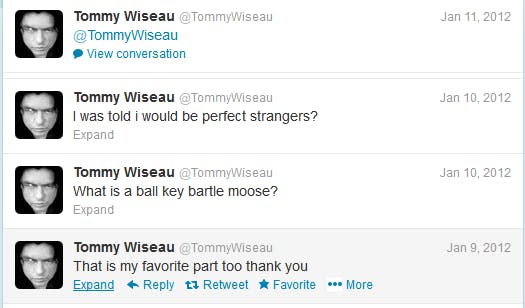 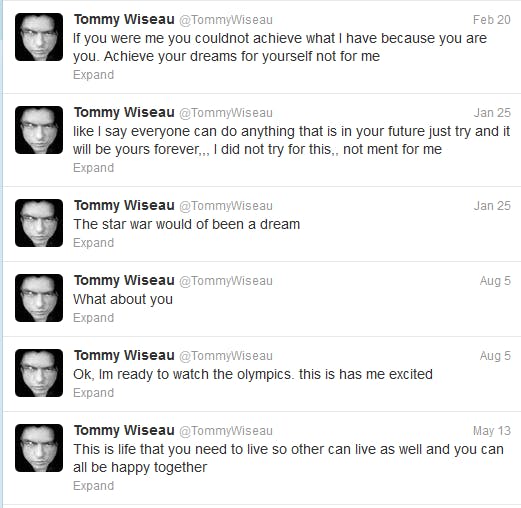 But despite the superficial ineptitude, Wiseau, who allegedly trained at the American Conservatory Theater, may be onto something. After all, he’s spawned a massive cult following complete with audience participation and regular packed showings at theaters all over the world. Not to mention his own bobblehead doll.

Perhaps before we break out the Tommy Wiseau Twitter drinking games, we should stop and heed the wisdom of a master. Especially when he tells us, “Creativity comes from yourself and yourself can be creating things that you want to happen for yourself.”