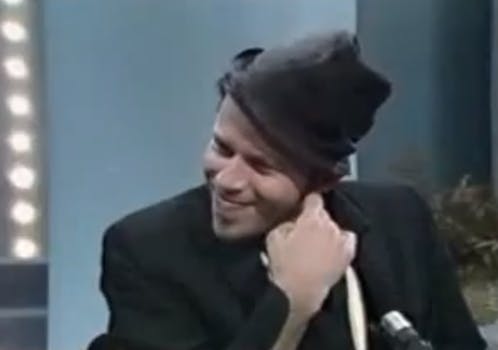 What are the odds that Heath Ledger watched this 1979 interview from The Don Lane Show?

Did a young Tom Waits inspire Heath Ledger’s iconic performance as The Joker in The Dark Knight? That’s the latest rumor to spread across the Internet, thanks to a recently rediscovered interview of the gruff songwriter.

Waits did the interview for the Australian television show The Don Lane Show in 1979. Throughout the 10-minute segment, the notoriously quirky performer comes across as enigmatic and aloof, two words that perfectly describe Heath Ledger’s The Joker. The similarities extend beyond the demeanor, too. Their mannerisms and gravelly speech bear uncanny resemblances.

The YouTube video was first uploaded on June 25, 2008, but it didn’t explode until earlier this year when user beasterne submitted it to Reddit’s r/videos category three months ago. The link ended up making it it to the front page, and over 113,593 people, according to YouTube’s views and discovery statistics, watched it as a result.

The clip resurfaced again last Friday, when Newsarama picked it up. Since then, it’s been featured on Uproxx, Kotaku, and even The Chive.

The rumor, of course, is unsubstantiated. Ledger never revealed what inspired his Joker, and given that the interview aired the same year he was born, it’s impossible that he saw it live. That said, the two did meet and work together while filming Terry Gilliam’s The Imaginarium of Doctor Parnassus, though production on that film began after The Dark Knight.

Regardless, it’s a stellar interview and will put a smile on that face.