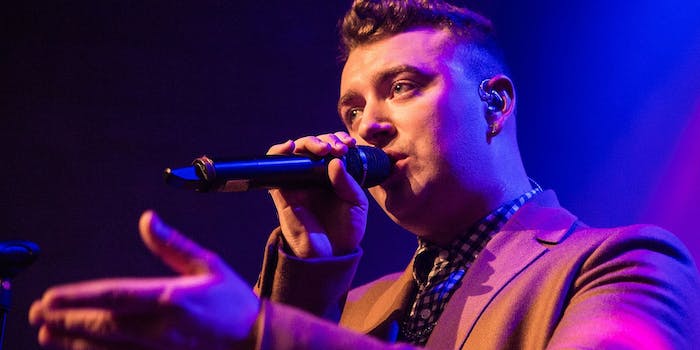 Sam Smith will pay Tom Petty royalties for ‘Stay With Me’

Yes, "Stay With Me" and "Won't Back Down" are the same song.

Following a “friendly” agreement on Monday, rock legend Tom Petty will receive royalties and writing credits over Sam Smith‘s worldwide 2014 pop smash, “Stay With Me.” The similarities between “Stay With Me” and Petty’s 1989 hit “Won’t Back Down” came to a boil this month following the former’s Grammy acclaim and nomination for both Record and Song of the Year.

The British singer agreed to add both Petty and songwriter Jeff Lynne’s names to the credits. However, Smith’s camp calls the resemblance a “complete coincidence.”

Petty and Lynne will not be considered Grammy candidates for “Stay With Me,” but that’s a technicality—it sure sounds like they should.

As a semi-related credit to Petty’s respect for the fringes of creative licenses as this relates to ripping people off, the Los Angeles Times noted his sparkling, honest approach. Ten years ago a Petty book called Conversations with Tom Petty contained the following  exchange between Petty and journalist Paul Zollo, when Zollo brought up the subject:

[Petty:] Yeah. That happens sometimes. You look up, and you think you’ve come up with something, and you realize somebody else has done it first. You try not to let it bug you. What bugs you the most is when you write something and then realize it’s somebody else’s song. That’ll happen to me two times a month. I’ll be working with something and then realize I’m channeling this melody from somewhere else, and then I have to abandon the idea. But there’s only so many words and so many notes, so sometimes you do cross somebody else’s territory.

[Zollo:] Have you found that as the years have gone by, you’re better at knowing when you’re using somebody else’s melody?

[Petty:] Yeah. And when that happens, I just have to throw it away.

[Zollo:] Throw it away or change it?

[Petty:] Well, I just usually pitch it. And start over. Because if I change a note or two, it’s still going to be in my head that it’s that other song. So I think every songwriter must have that problem from time to time. You play something and you realize it’s Beethoven, or the Beatles.