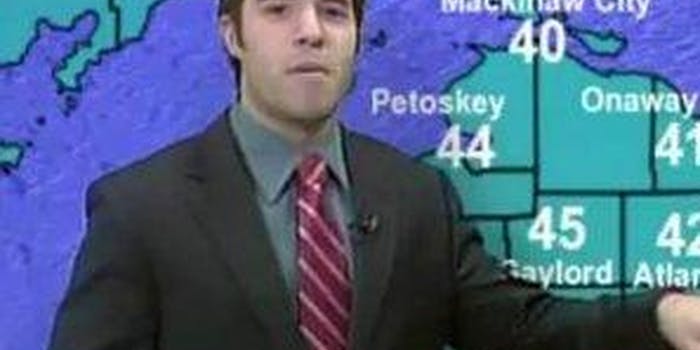 There's no need to Auto-Tune the News when Tom Murphy is on the scene.

Snoop Dogg might want to grab an umbrella; it’s expected to drizzle today.

To borrow one of Murphy’s phrases, his latest reel has Reddit “leaning back like Fat Joe in the Terror Squad.” The video has garnered 619 comments after being posted on the site Tuesday night.

“Lost it at the smurfs reference,” commented ScreenPrint. Another fan, famous_amos, wrote, “This guy is good… I like how he adds a little flavor to meteorology.”

Murphy’s frequent sports references shouldn’t come as too much of a surprise, since he has sports broadcasting experience from his college days. (Though perhaps he’d have more luck in thinking of football players’ jersey numbers that match temperatures if Celsius was used instead of Fahrenheit.)

In his other clips, Murphy quips about everything from Mario Kart 64 to MacGruber, and you can just tell that he’s having a ton of fun at his job.

Maybe we’re looking at the next senior weather correspondent for The Daily Show.