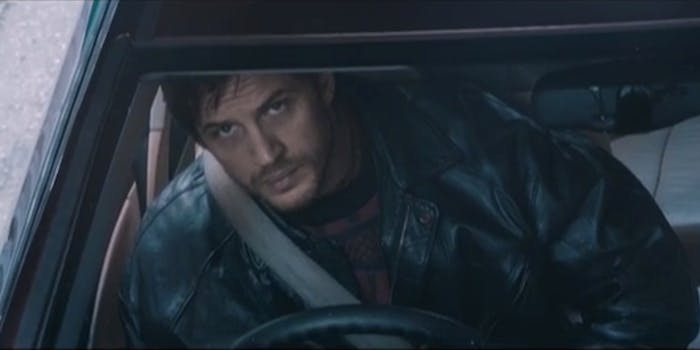 A real crime gets a musical twist.

Tom Hardy in a musical? That’s not the oddest thing about this trailer for London Road, a new film that serves as a hybrid of musical and documentary about a series of real-life murders in a small British community.

The film, starring Broadchurch‘s Olivia Colman, is based on a string of serial murders in which five prostitutes were killed over a five-week period in late 2006. The Ipswich serial murders were the work of a forklift driver named Steve Wright, who was sentenced to life in prison.

The new movie, judging by the trailer, focuses on the impact the murder had on the town of Ipswich, and the reactions of a shocked populace oblivious to the killer in their midst. The title, London Road, is the name of the road Wright lived on in town.

The musical is written by British playwright Alecky Blythe and composer Adam Cork and started its life on the stage. It was commissioned by the Royal National Theatre and quickly became the surprise hit of 2011, becoming so popular it had to be moved into a larger venue.

Don’t look to see Hardy taking over the show, though; the plot focuses on the community at large, and features the entire original cast of the stage production. No word on whether the Mad Max star gets his own solo, but London Road is already raking in critical acclaim, so we’ll be there with bells on—even if we’re not exactly sure what we’re watching.