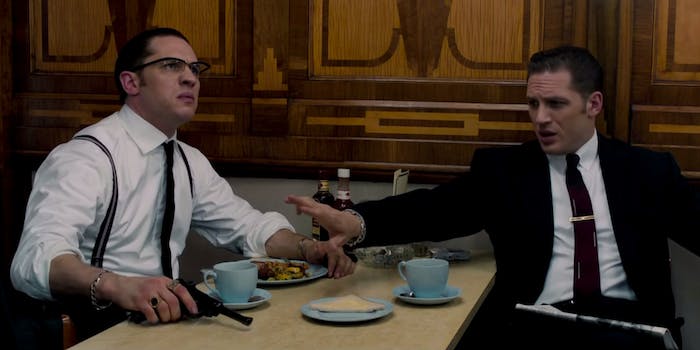 Few actors could pull off a gritty period drama in which they play two different characters without looking a bit ridiculous, but then few actors are Tom Hardy.

Fresh from garnering raves as the barely verbal Mad Max, the Bane actor has a whole different bag of tricks up his sleeve for the much-hyped biopic Legend. The drama follows the rise and fall of London’s famously enigmatic Kray brothers, identical twins and gangsters who reigned supreme over London’s East End for most of the ’60s. It comes with an all-star creative team attached, including Oscar-winning screenwriter Brian Helgeland (L.A. Confidential) and Hardy playing both of the film’s lead roles.

You might think that’s a stretch, but not judging by the first U.S. trailer for the film, released earlier today. Hardy has clearly found a different mien for each brother, and unsurprisingly it seems to be working brilliantly:

Perhaps the most unexpected thing about the film is how humorous it is.

Who knew the gangster life was so much fun?