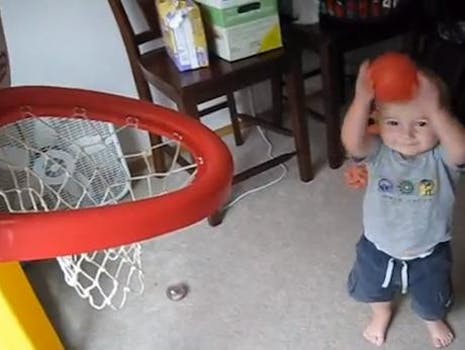 Word has it that Duke scouts are watching this toddler's development closely.

Dude Perfect may have just found its newest member—only he’s still in diapers.

The baby baller is named Titus and in a trick-shot video posted to YouTube Sunday, the 2-year-old exhibits the defiance of Lebron James and the scary accuracy of Reggie Miller as he sinks jumpers in the face of his older siblings and swooshes more than five baskets in a row.

“He began shooting baskets shortly after learning to walk, we started filming some, and then got totally carried away,” reads the video description on YouTube. “This is the trick shot video that makes other trick shot videos look like a bunch of old guys who should have something better to do — like retire, turn up their pacemakers, or join an assisted living facility.”

The video has reached the top of Reddit’s r/videos section Tuesday, where it collected more than 300 comments from people speculating on what NCAA basketball powerhouse he will enroll at.

“As long as this kid’s parents make sure he is always having fun making baskets, when he’s grows up he’ll be the leader of the revolution,” naterader added.