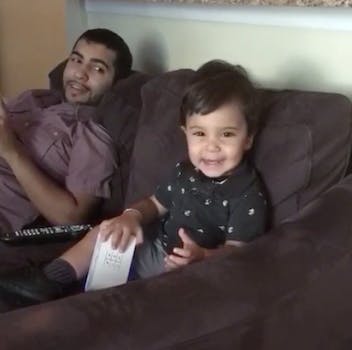 Toddler has the most adorable reaction to Adele’s ‘Hello’

Oh, Adele will see this.

Adele‘s new single “Hello” is kind of a bummer, but one-year-old Jalal found a way to make it funny without even trying.

The vine of his reaction, which Abdel-Nasser Hijaz uploaded two days ago, has gotten more than 14 million loops already.

When Hijaz realized his vine was getting popular, he worried that he should’ve used more hashtags so Adele might have noticed:

But it’s gone full-viral since then, making appearances on the Huffington Post, EllenTube, and BuzzFeed:

Something tells us Adele will see it. H/T Buzzfeed | Screengrab via Nasser Hijaz/Vine