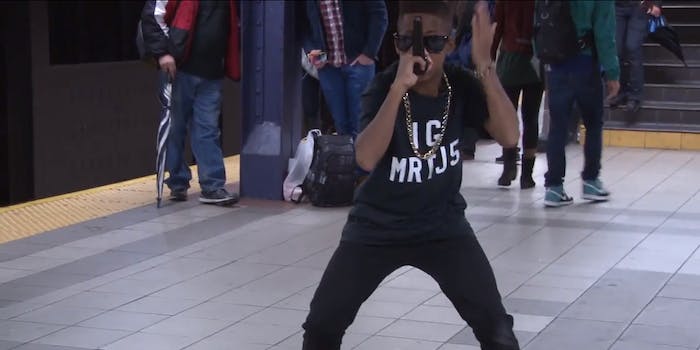 This 13-year-old rapper is the future of hip-hop

This young rapper may have an old-school swagger, but he is the future of hip hop. Following in the footsteps of other child acts like Kriss Kross, Another Bad Creation, and Lil Bow Wow, TMA TJ —TMA stands for “Talented, Motivated, Ambitious”—is a 13-year-old upstart from the Bronx, New York. Video journalist Kareem Ahmed filmed a short documentary that introduces TJ and his brother to the world and gives us some insight into his beginnings, motivations, and moral ideals. (The latter is surprising for such a young personality.)

In the short video, TJ discloses that he’s been rapping since he was 11. He’s a dedicated student in school and seeks to be a role model to others. “Being a role model is, like, doing good things,” TJ explains. “Kids or parents can [say], ‘Be like this kid, or be like that kid, he has good grades, he’s well mannered and he’s respectful. And he has an education.” He goes on to introduce his brother, Mayson. He describes Mayson’s impact on his music and style, and talks about how the two look out for each other and keep each other grounded.

With the stage presence and charisma of a veteran performer, and lyrics like “You still acting dumb, but you got a smartphone” and “My jerseys say No. 1/No Rose, I’m just top-notch,” it shouldn’t be too long before TJ is a household name.