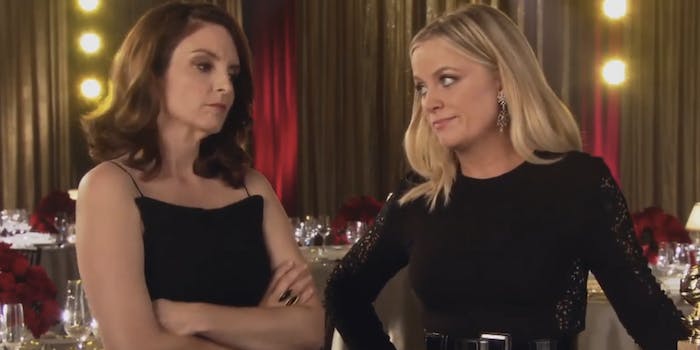 Did you know the Hollywood Foreign Press are actually Banksy?

America’s funniest people are back to host the Golden Globes for a third time this weekend, and, according to them, they have no plans to keep any of the jokes fresh, instead just pulling from bits from the past.

“We’re going to show a 20-minute montage of the jokes that worked, and then we’re going to come out at the end,” explained Amy Poehler.

Poehler and co-host Tina Fey revealed their “plans” in a funny new promo video for the awards, airing Sunday, Jan. 11 at 8pm ET. They promise to approach it differently this year.

“As god as my witness, I’m not going to dope this year,” Fey joked. “I’m going to do this one clean.”

The duo also suggest a Hunger Games–style challenge for nominees, just to “see who wants it more.” Not a bad idea, especially if they keep the alcohol element that makes the Globes decidedly more entertaining than its stuffy Emmy and Oscar counterparts. Drink up, and then head to the cornucopia for your weapons, celebrities!