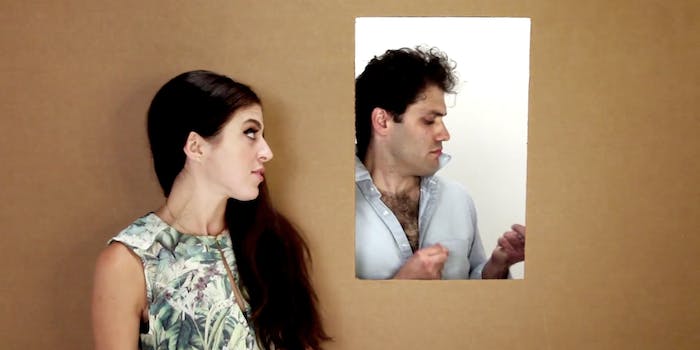 The good news: The song is actually pretty catchy! The bad news: It's called "Swipe."

Had dating apps existed 50 or 60 years ago, there’s no doubt they would’ve played a prominent role in classic pop ballads, however terrible that might sound. (Just replace the word “love” in every Beatles song with “right-swipe” or “dick pic,” and you’ll get a pretty good idea.)

With this in mind, it’s actually kind of surprising that it’s taken so long for someone to come out with a song about Tinder. But thankfully, someone has: The five-piece “eccentric chamber pop” group Miracles of Modern Science, which has just released a music video for their single “Swipe,” a song about—you guessed it—swiping through potential suitors on Tinder.

Featuring the vocal stylings of Brooklyn-based singer Kristin Slipp, the song and its accompanying music video can best be described as “quirky”: There’s a lot of shots of bearded, fedora-wearing white dudes preening and flexing, as the woman in the video swipes left on them all. (Which is, all things considered, a pretty accurate reflection of what living in Brooklyn and using Tinder is actually like.)

But in all seriousness, the song is pretty catchy—especially with its chorus, “So if I whet your ample appetite/Go ahead and swipe me to the right”—and it’s hard to resist the charm of two people singing about using up all the data on their phones while a goofy white guy swings on the mandolin. So go ahead and swipe right on this one—just try not to think about the inevitable sequel, a mandolin-infused, mournful paean to Yo.