The Denver Broncos quarterback inspired the latest touchdown pose to sweep the Internet.

Planking has found its gridiron counterpart—Tebowing.

Named after Denver Bronco’s wunderkind quarterback, Tim Tebow, the act of Tebowing is imitating the signature move he does way too often during games.

The act, which recently spawned a Tumblr, is simple: “[G]et down on one knee and start praying, even if everyone around you is doing something completely different,” the blog explains.

There are variations, too! Posing in tree stumps is called Treebowing, bowing down after losing a game flip cup is Tebro-ing, and committing this spiritual act in the bathroom is called The Tebowl, naturally. Submitting pics to this new Tumblr is highly encouraged.

The site is selling shirts so you can Tebow while in your T-shirt. Meta!

Sure, there have been lame imitations of planking, like shoeing, but this trend has long-term potential. Tebow is one of the most promising new quarterbacks in the NFL, and Tebowing could become as big as the Atlanta Falcons’ “Dirty Bird” or the Chicago Bear’s “Superbowl Shuffle.”

And what better way could there be to pay tribute to the NFL’s unofficial Jesus? 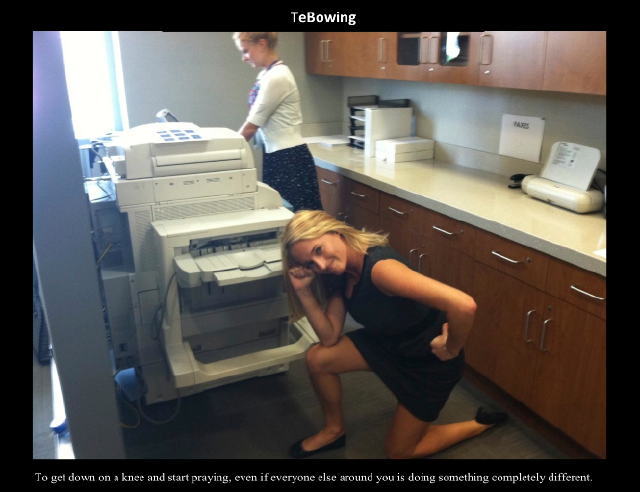