Tequila's request was trashed by a number of commenters.

Tila Tequila, who might have first crossed your path either through MySpace or on her MTV reality show late last decade, has had a turbulent run on social media, telling us why Hitler was so misunderstood and then getting banned on Facebook for being an out-and-out anti-Semitic.

Now, she’s asking for your help. It’s because she needs money.

So, she’s turned to GoFundMe so she can get “a new home and furniture” as she raises her one-year-old daughter, Isabella. As she wrote:

The reason why I am creating this GoFundMe campaign is because they have raised the rent at my old home to $4,500 a month, and being a single mother without any support from the father, it can sometimes be very tough taking care of 2 people with only a 1 person income. So right now I need to raise some money so that I can move into my new home and get it furnished for my daughter and I. The last apt I was at came fully furnished and that’s why it was so expensive, but I’d rather save money for my daughter than keep wasting money each month like that. So I basically need to buy all the furniture and beddings from scratch to start over if we are to move. It is going to cost a lot to start off, and that is why I am asking you all for your help!

I have zero pride or ego when it comes to taking care of my daughter because this is what real good mother’s do. We sacrifice for our children and would take care of them by any means possible. Even if that means being a celebrity, and creating a GoFundMe campaign to get hep from my fans. Most people would be so ashamed or embarrassed, but I’m not. This is for my daughter so we won’t be homeless and she won’t starve. It’s not easy raising a child alone, but I am doing the best that I can to give her the world, and beyond! Thank you so much for listening, and thank you so much for your help! As soon as we hit this goal I will give everyone a live tour of our new home and the beautiful furniture and beddings!

Not surprisingly, Tequila’s request was trashed by a number of commenters (though she surpassed her initial goal of $2,500 in only a few days). A small sampling: 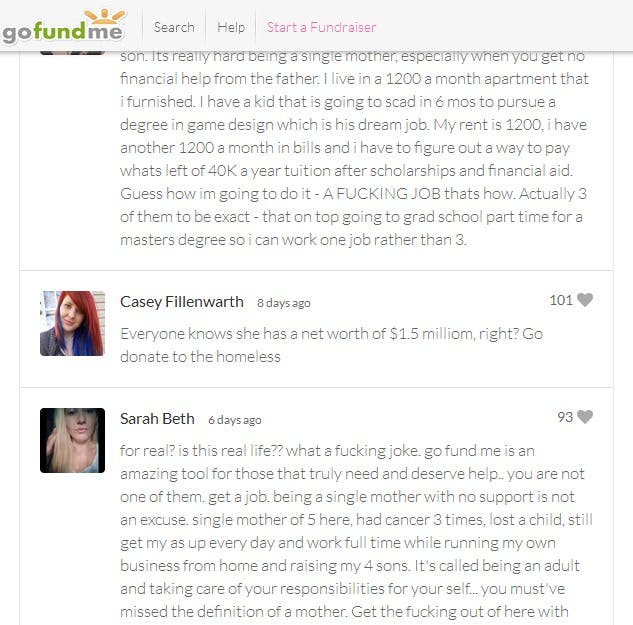 But here’s the good news: Tequila said that she would make a phone call to everybody who donated to her cause. The potential bad news: If you get that phone call, it’ll probably just be a robot clone.