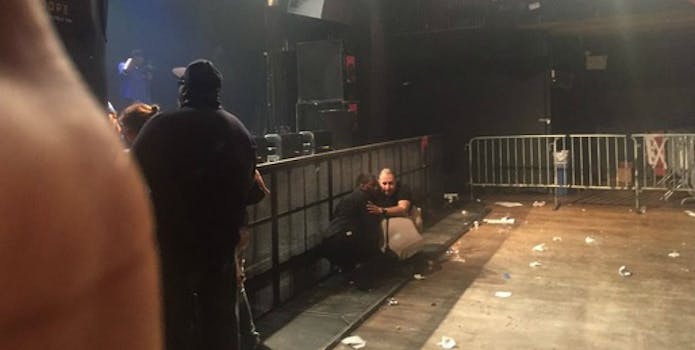 The footage from the venue is terrifying.

Minutes before rapper T.I. was set to play a concert at New York’s Irving Plaza, gunshots were fired, leading to mass hysteria as concertgoers rushed from the club.

A New York police department spokesperson tweeted that four people had been shot. XXL Magazine reported that police had evacuated the building, and according to Pix11, about 1,000 fans were in attendance at the show.

Within minutes of the reported shooting, pictures and videos began to filter onto Twitter showing the aftermath.

Seven months after dozens of people were shot and killed at an Eagles of Death Metal concert in Paris, this was the scene late Wednesday night in New York.

Evacuated after shots fired while crowd waited for @Tip tonight at @IrvingPlaza pic.twitter.com/2hDT9qgO9t

Outside Irving Plaza, EMS pulled out one victim on a stretcher @PIX11News pic.twitter.com/8jGv6sDKBp

Police told BuzzFeed that the three reported shooting victims had been taken to local hospitals.

Update 4:36pm CT, May 26: The NYPD has released a video from inside T.I.’s dressing room at the time of the shooting. The video is both violent and disturbing.