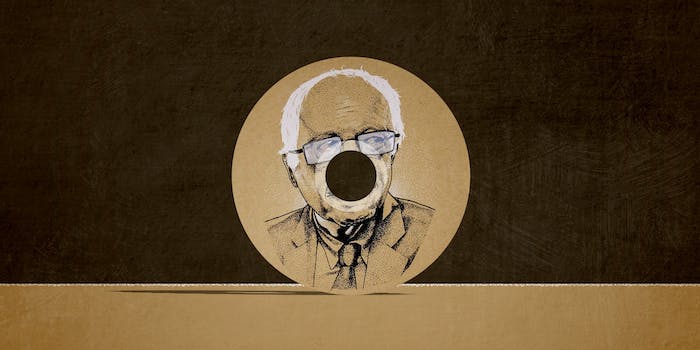 All you need to do is donate directly to Sanders's campaign.

Former Sonic Youth guitarist Thurston Moore has expressed his support for Bernie Sanders, in the form of a vinyl single.

Moore has penned the song “Feel It in Your Guts” as part of a special collaboration with the Democratic presidential hopeful, via Joyful Noise Recordings. It’s an acoustic song, cut with snippets of various Sanders speeches, and it’s especially surreal to see Sanders’s mug sitting next to releases from experimental groups like Half Japanese and Deerhoof.

All they’re asking is that you first make a direct contribution on Sanders’s site, take a screenshot, and then upload that on JNR to redeem. A note on the site says this is necessary because “Joyful Noise is a company… and that means Bernie won’t accept a check from us.” The limited-edition vinyl has already been snatched up, but you can still cop the digital download, for a suggested $27 donation.

In a press release, JNR’s “curator” Karl Hoffstetter explains, in part, that they did this because “Bernie Sanders inspires us.”

In a political and business climate which is increasingly self-interested and money-driven, Bernie Sanders alone remains uncompromisingly focused on the issues that affect 99% of us. Which is to say, he’s talking about the things that will improve the lives of ourselves, our families, and basically everyone we have ever met.

No word yet on a Thurston Moore/Red Hot Chili Peppers/ICP summer tour.