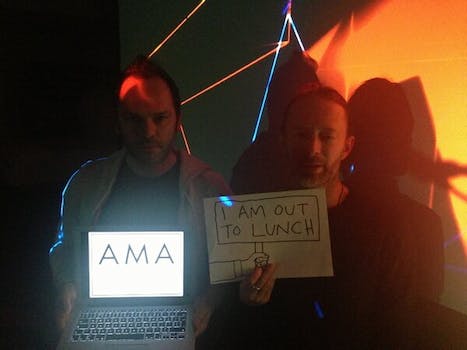 The Radiohead frontman took a break from chatting up the musical android in his head and attempted to communicate with ordinary humans.

Radiohead and Atoms for Peace frontman Thom Yorke took a break from chatting up the musical android in his head earlier today and attempted to communicate with ordinary humans. The results of Yorke’s Reddit AMA were mixed.

Yorke and fellow Atoms for Peace member Nigel Godrich were promoting their newest album, Amok. Yorke has a reputation for being a bit of an oddball in real life, and his answers on Reddit were predictably circuitous and occasionally nonsensical. They were also atrociously ungrammatical and at times impenetrable—but highly entertaining.

In the industry, he’s also known to be a bit of an abrasive jerk. Thankfully that side of Yorke’s personality didn’t show up on Reddit. He was downright nice. We think.

Here are the best of Yorke’s weird and barely legible comments. How much of your soul do you put into your lyrics…or…how ‘seriously’ do you wish people to take your lyrics?  (Huck13b3rryF1nn)

confessional?!! mm i don;t think so at all. do you think M Stipe’s lyrics are confessional? what is within is also stream of consciousness is also gibberish and also just sounds. by the time the words have stuck, they have just stuck. the glue is set and i can’t undo. before that is a messy bit.
does that help? ofcourse not.

Thom, do you plan to explore the low end of your range more in the future? I love how you sound on Wolf at the Door. (waterspeaker)

Yes i would love to. I know its there, ive heard it. its not naturally where i end up. So it’s a good place to head, deep into the woods. The back of the cupboard.. ya nah?
thm

Jack White says Radiohead have a single ready to go. When can we expect that/ what songs did you record for it? (Lelsubreddit)

We was at AJck Jack Whites places… we now have two unfinished tracks, one of which is identikit. Its nice there, red and black and white nshit.
err, we work slower than him (umderstatement)
hi everyone

When you’re tinkering with a song idea, how do you make the determination that “this one’s for Radiohead” vs. “this is an Atoms for Peace song”? (iceybloop)

its a grey area. getting greyer. obviously depends on who is being sampled. are you being in sampled?
tmh

Dear Thom, I would like to know if you prefer tea or coffee? And do you use sugar or honey or nothing in your hot drink? (thomineyork)

ah finally something important. today is a strong coffee day. 7am deserves it. im a pain in the arse without if that helps? mostly. thm

Thom, how did you become comfortable sharing your voice with others? Were your formative years a struggle to find your voice as a writer/musician or was it more of a painless evolution? (SlingDinger)

have no good questions, but thought I’d say hello. Keep up the good the work. (music4mic)

you win. i would like to give you a prize. i need a coffee, would you like one?