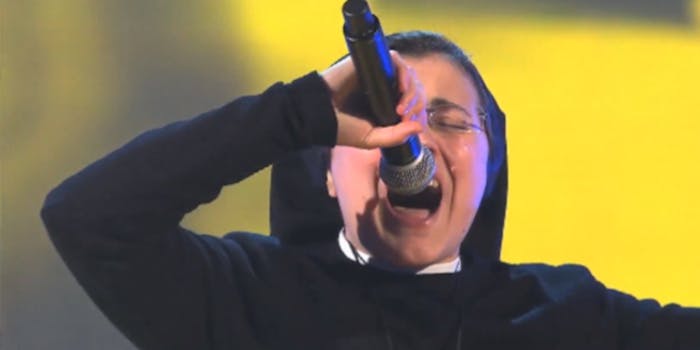 With her magnificent victory comes a record deal with Universal, but she hasn’t indicated whether she’ll take it yet.

Everyone’s favorite singing nun is back, and she’s just won the Italian Voice.

Sister Cristina Scuccia, 25, and a member of the Ursuline Sisters of Milan’s Holy Family was last seen when she took the judges by storm in the blind round with a rendition of “No One” by Alicia Keys. While the Internet found new things to obsess over, Sister Cristina slowly progressed through the show and last night won the final with 62 percent of the public vote.

After winning, the nun kept her modest attitude up and asked the audience to join her in a recitation of the Lord’s Prayer. Thanking her fellow sisters who had come along to all of the previous rounds, she lifted the trophy into the air and thanked God.

With her magnificent victory comes a record deal with Universal, but she hasn’t indicated whether she’ll take it yet. “My presence here is not up to me; it’s thanks to the man upstairs!” she said. “I’m not here to start a career but because I want to impart a message.”

The songs that led her to the finals are as superb as her Alicia Keys cover, and they included Bon Jovi’s “Living on a Prayer,” “Time of My Life” from Dirty Dancing, and “What a Feeling” from Flashdance.

Screengrab via the Voice of Italy/YouTube