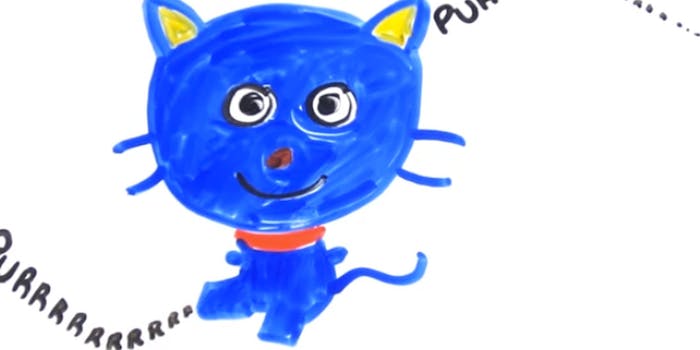 Science explains why cats are so friggin’ weird

Now we can finally justify watching a cat video: for science!

The Internet sure loves its cats.

We’re fascinated by their every whim. We’re entranced with a particular grumpy feline. We don’t really know why they do things that they do, and now we can finally justify watching a cat video: for science!

“Cats spend around 85 percent of their day doing absolutely nothing,” Moffit explains. “Drinking, eating, defecating, and even mating only take up about four percent combined.”

However, when cats do move, they are always able to land on their feet due to the “Righting Reflex,” which allows them to determine which way is down, and their flexible backbone and lack of a collarbone that allow them to rearrange themselves on a moment’s notice.

“They also rub up against you to spread these pheromones,” Moffit says. “The glands on their face, tail, and body help them to claim you with their scent, while also leaving nearby cats signals about their identity, sexual availability, and territory.”

Some people may be convinced that their cat is trying to kill them, but some of their actions show their acknowledgment that humans are the dominant species. Along with preventing predators from finding them, it’s why cats bury their poop. Even determining color is scientific. If a cat is more than one color other than white, it’s most likely a girl since color traits are carried on the X chromosome.

However, science still can’t tell you why cats purr—they do it both when they’re happy and distressed—so it’s a perfect excuse to sink your teeth into more cat videos. And if anyone asks, tell them it’s for science.