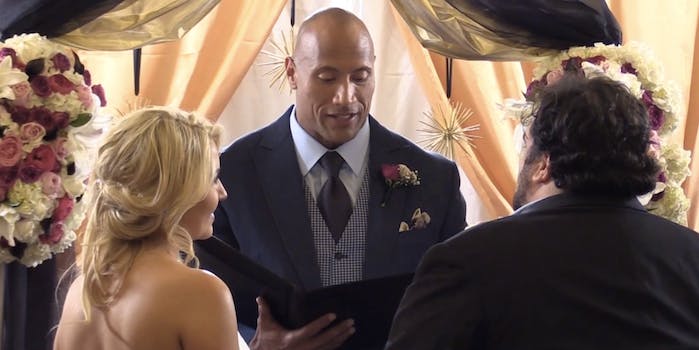 Dwayne Johnson, you are just too much sometimes.

Sometimes your worst day can become your best day, with the help of Dwayne ‘The Rock’ Johnson, Prank it Fwd, and the love of your life.

Nick Mundy, a correspondent for Screen Junkies, is a massive fan of The Rock. Over the course of multiple interview junkets, the two have built a rapport, and Mundy even asked Johnson to be his best man at a previous event. Little did he know that Johnson would do him one better.

Mundy thought he was attending a junket for Johnson’s upcoming film San Andreas, but everything suddenly went wrong, leaving him sad and wearing American flag pants. All of a sudden, Johnson surprised him, brought him into a room full of family and friends, and legally officiated the wedding right then and there.

There are two major takeaways from this moment. First, Mundy’s wife Dilara is the best person in the world. Someone who understands how huge it is to have The Rock officiate your wedding is someone you should hold onto forever.

Second, Johnson is a legally ordained officiant in California. This means you, too, could potentially have The Rock conduct your marriage ceremony.  Mundy’s great day just became a great day for everyone who has ever dreamed of The Rock pronouncing them married for life.