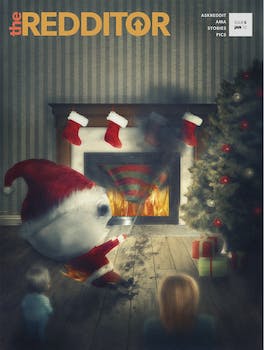 The magazine based on Reddit is going gangbusters. Read all about it here.

Reddit has conquered the social news world thanks to the might of its democratizing algorithm. Now a user-run project has turned that core function on its head. The Redditor magazine eschews cold machine logic for a far more primitive editorial technique: good taste.

And so far, that approach has been wildly successful.

Produced by three redditor volunteers, each monthly issue bulges with about 70 pages of Reddit’s best content. The latest lands today.

Since August, the digital-only magazine has amassed 130,000 downloads. Its subreddit—or Reddit sub-section—boasts about 7,500 subscribers and is growing fast, with 3,000 new readers added last month alone. That’s all in just five months. Little surprise The Redditor’s creators are brimming with ambition.

Yet oddly enough, it all started as a joke at Reddit’s expense.

Back in April, Ryan Laing, a 25-year old from lives Los Angeles, created the account KILL365.

Under that pseudonym, he trolled the social news site, dropping clever comments that mocked mainstream Reddit culture. Laing’s sophisticated ridicule reached its height in July, when he created a mock-up cover for the magazine.

The cover lines were jokes at Reddit’s expense (“Need Karma? See which memes are hot this summer”—karma is Reddit’s internal scoring mechanism, and probably the easiest way to get it is to post memes). Redditors loved it. Laing’s post became one of the most popular in r/pics’ three year history.

That success gave him an idea: Reddit can be great, but it runs rampant with group-think and predictable Internet flotsam. What if he used magazine to highlight all the truly great, original content on Reddit—the stuff that gets buried thanks to that tasteless Reddit algorithm?

So as his image was rocketing up the front page, Laing created a subreddit, r/theredditor, and brought in his old college friend, Blair Drager, to help out as editor (“He unfortunately introduced me to Reddit,” Laing wrote dryly, referring to Drager).

Laing taught himself how to use publishing software, Adobe InDesign. He and Drager scoured the site for its best content. Their friends helped out with editing and proofing. A month later, they were ready to release issue number two, which they again advertised with a post to r/pics. They were really picking up steam.

It was around this time that Jack Howard, a professional designer from Australia, joined the team.

“I saw a lot of designers in the subreddit offering to help,” Howard told me. “But no one had stepped up and presented an alternative design. So I did, and they (and the community) responded well, so we went for it.”

Laing added: “He literally redesigned half of our entire issue, posted it, and blew everyone away. Hired.”(Of course, by “hired” he meant brought on as a volunteer: the magazine makes no money).

Laing had already shown a fine eye for design and layout in the first issue. But Howard, with his more than 10 years of experience in the business, including work at newspapers and ad agencies in Australia, took things to the next level. Now the Redditor wasn’t just looking good—it was putting a lot of mainstream print rags to shame. (The Redditor is available online only.)

The magazine’s enduring, growing popularity is testament to the work Laing, Drager, and Howard put into each issue. Drager estimates they each spend about 60 hours of their free time each month on the project.

“We have an awesome team of three right now and we’re able to get one issue done a month,” Drager wrote. “Yes there are times where we go crazy, but so far it’s working very well.”

That’s despite the fact that the volunteer staff of three lives on different ends of the globe (Drager lives in New York City).

“Somehow between the hundreds of emails a month, a dozen drafts, concepts that don’t make it, and always pushing to improve, we work well together,” Laing wrote.

There’s no bigger proponent of Reddit-spawned projects than Reddit, Inc itself.  Back in June, Reddit swept in to help Radio Reddit, its user run-music service. And earlier this year, the company made its first corporate acquisition: the user-created gift exhange Redditgifts. Erik Martin, Reddit’s general manager, told me he’s a big fan of The Redditor.

As an all-volunteer effort, how long can the magazine keep going? The Redditor’s thousands of fans would love for it to become an official part of Reddit, or at least make money on its own. They’ve scoured the user agreement. They’ve found proof, they believe, that The Redditor can legally become an independent, commercial enterprise—so long as that’s with Reddit’s official blessing.

For his part, Martin told they Daily Dot the company had no intention of getting “into the magazine business.” But that’s largely because the magazine itself is so new; the whole project is plowing into uncharted territory.

Martin added this statement in an email:

In general, we want to find a way to encourage the community to do all sorts of awesome, creative things with Reddit, like the magazine. We just haven’t figured out all the details and logistics yet. Having a community group make an independent commercial magazine based on user-submitted content is a pretty new animal.

Laing has some other ideas, especially ways to officially roll the magazine into the site. What if The Redditor were added to Reddit’s existing subscriber service, Reddit Gold, for instance? Reddit needs a way to better justify that service, Laing said. And he’s right: at present, it’s basically a glorified donation mechanism; there’s little incentive to pay, beyond satisfying an itch to feel generous.

“It’s easy to imagine iPad and PDF packages—monthly issues for a dollar, high quality issues for two, and print editions for three,” Laing wrote, “ Bundle it in with Reddit Gold, push this new magazine as hard as they do their sweatshirts and stickers, and I truly think the community would embrace it.”

I asked Laing what the next step would be if the magazine can’t get Reddit HQ’s official support. Donations might be a possibility, he said, “but I don’t think it would save the project overall so I am hesitant to accept anything.

“Right now there is no ‘next step’ beyond continuing to do what we’re doing and putting out solid issues until for whatever reasons we cant.”