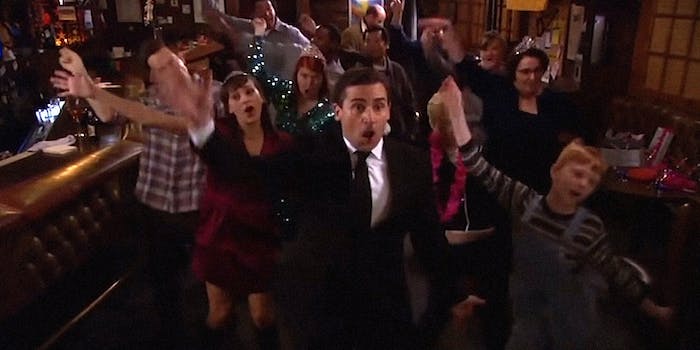 It's free to watch in all of its glory.

Threat Level Midnight, Michael Scott’s (Steve Carell) action-packed cinematic masterpiece on The Office, is finally available for all of us to watch online.

The short film, which clocks in at just under 25 minutes, has been part of The Office’s fabric since the show’s second season when someone discovered the screenplay that Michael had written. It was a throwaway nod at the time, but by the time we got toward the end of Carell’s run on The Office in season 7, the show turned it into a reality.

Like most things at Dunder Mifflin, the process of making Threat Level Midnight wasn’t easy. It took Michael a decade to write, re-write, shoot, re-shoot, and edit the film together, and it features just about every employee who ever walked into the doors of Dunder Mifflin. The references vary, making nods to the Bourne series, Goldfinger, Armageddon, and Ferris Bueller’s Day Off.

It’s absurd and outlandish and completely of the early 2000s when the film was made in The Office; some of the film aired during an episode titled “Threat Level Midnight” that aired in 2011.

“It’s like a home movie if Michael Scott did your home movie,” Jim and Pam explained.

It’s even funnier now that we know that Jim, a.k.a. John Krasinski, who played the villain Goldenface in the film, ended up becoming an action star in his own right after starring in the Amazon Prime series Jack Ryan.

For fans who might have only experienced The Office as it aired on TV or streaming on Netflix, parts of Threat Level Midnight will look familiar. But if you own the season 7 home release, chances are that you’ve already seen it. The entire film was included as an extra on the season 7 DVD and Blu-ray.