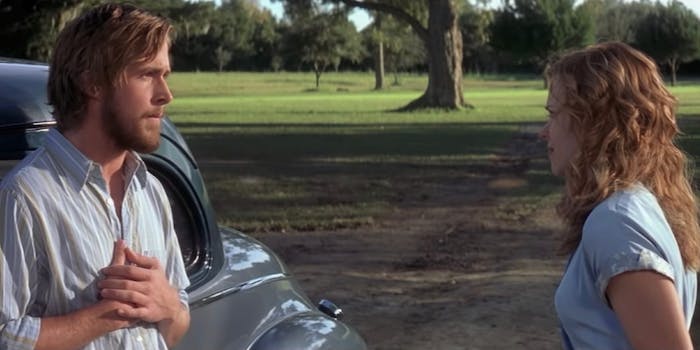 ‘The Notebook’ is missing a key scene on Netflix (updated)

Love it or hate it, The Notebook—the 2004 romantic drama based on the Nicholas Sparks novel—can make even the most cynical of viewers cry. But for U.K. Netflix viewers, one of the film’s bigger gut punches isn’t included in Netflix’s version at all.

Throughout The Notebook, Allie and Noah’s love story is framed as the kind of story an elderly man tells a woman he visits at a nursing home. But as viewers soon learn, that love story is their own, and in the present, the older Noah visits the older Allie (who has dementia) to retell their love story in hopes that it jogs her memory. On the day that The Notebook takes place, Allie does remember who Noah is, for a time. They fall asleep together in Allie’s bed, and by the time that the nurse finds them the next morning, they both died in their sleep. The final scene shows a flock of birds flying over a peaceful lake.

But in the version of the film that is available to stream on Netflix in the U.K., the scene in which the nurse discovers Allie and Noah’s bodies is gone. It cuts from them falling asleep together to the birds. If someone had never seen The Notebook before and didn’t know how it ended, it lends itself to a more open interpretation of the ending. You could surmise that Allie and Noah died, but you could also read that as them simply falling asleep before Noah spends another day trying to jog his wife’s memory.

“Whenever you change the ending of a film, especially one that’s been around for a while, people are going to have opinions,” Sparks said in a statement given to Today. “Some will be OK with the change, but others won’t be.”

Although fans have only noticed this change within the past few days, it may have been that way even longer. One Stack Exchange user flagged the change last October in a post asking if there was an alternate ending of The Notebook because what they saw was different than the plot summary on Wikipedia. But needless to say, some of them weren’t exactly thrilled at the prospect of a different ending changed long after the fact. Others pointed out that the new ending of the film is closer to what was in the book.

I'm not big into romantic movies but I have seen #thenotebook and @netflix what you did wasnt ok that ending was beautiful it's all I can ever hope for in my marriage so when I finally eat dirt I can go with the one I love dont you dare take that away! Put it back!

Whether it’s in regards to missing scenes or altering footage so that it’s cropped differently than the original version, Netflix has faced accusations from users that it’s edited films for years. (In regards to cropping, Netflix has said that it sometimes will “end up offering the wrong version of a title” by accident.) But some have argued that the discrepancy is because Netflix streams the version it’s given.

The Notebook will arrive on Netflix for U.S. viewers on March 1, so we’ll have to wait to see what version they will have. But now that a different version is streaming in the U.K., we’ll be sure to hear about it even more quickly now that viewers will be on the lookout for it.

In a tweet on Wednesday, Netflix said that the alternative version of The Notebook “was supplied to us,” adding that the company was “getting to the bottom of it asap.”

Things you should know…

– we did not edit the notebook
– an alternate version exists and was supplied to us
– we are getting to the bottom of it asap
– apparently some films have more than one ending?!

Netflix’s See What’s Next Twitter account also confirmed that the version of the film coming to the U.S. streaming service would include the original ending.

But rest assured that the version of The Notebook coming to the US on March 1 will be the version that has always made you sob. https://t.co/2G5BWzYurj

Netflix UK & Ireland issued a follow-up tweet on Thursday morning announcing that it had uploaded the familiar version of The Notebook.

one more thing you should know: we've uploaded the correct (is it correct? who knows at this point) version so the familiar ending is restored