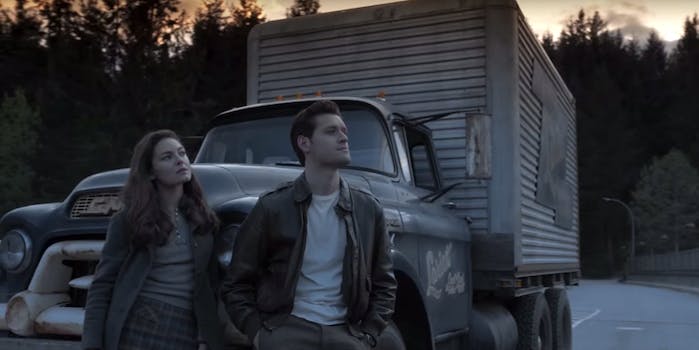 The alt-history drama was Amazon's most popular pilot ever.

Amazon Studios will preview the first two episodes of its upcoming alt-history adaptation of The Man in the High Castle online this weekend a month before it premieres.

The show, which is an adaptation of the 1962 Hugo Award-winning novel by Philip K. Dick, was greenlit back in February after becoming the most-watched pilot in Amazon history. While the pilot has been available to Amazon Prime members since January, this is the first time the show’s second episode will be available to the public after a fan screening at New York Comic Con.

The episodes will become available to anyone—not just Prime members—on Amazon starting Oct. 23 at 12am PT (3am ET) and end at 11:59pm PT Oct. 25 (2:59am ET Oct. 26). The pilot in particular will be even easier for people to view, with partnerships hosting the episode on IGN, CraveOnline, and multiple Amazon-affiliated Facebook pages such as Amazon, Amazon Video, Kindle, IMDb, and The Man in the High Castle.

After the preview weekend ends, Prime members will still be able to watch the second episode through Amazon Instant Video.

The Man in the High Castle, which was a planned four-part miniseries at Syfy before going to Amazon and is already being compared to Amazon’s Transparent and Netflix’s House of Cards from critics, plays out what would have happened if the Allied Forces lost World War II. Germany and Japan split up the U.S.—with the Rockies acting as neutral territory—and are now in a Cold War 18 years later as life has gone back to a twisted and jarring reality.

But a film showing a different reality where the Allies won the war (different from our history) could possibly bring that all crashing down.

All 10 episodes of The Man in the High Castle’s first season debut on Amazon Nov. 20.