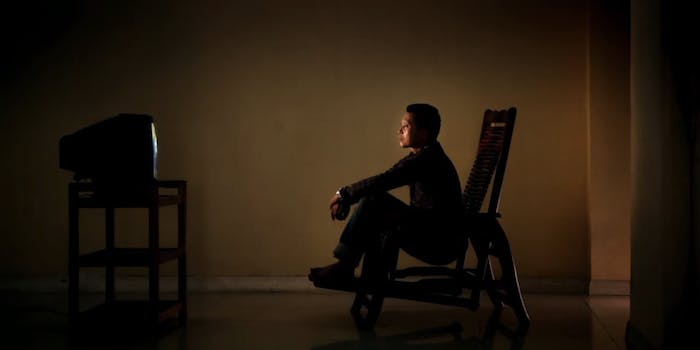 "We must stop, acknowledge the lives destroyed, strain to listen to the silence that follows."

The Internet has received its first trailer for Joshua Oppenheimer’s The Look of Silence, his follow-up to 2013’s heavily awarded The Act of Killing. It opens with the film’s central subject, Adi, interviewing an indifferent man, offscreen, on the Indonesian political landscape still controlled by those responsible for a 1965 genocide that resulted in the deaths of approximately a million people.

“No, I don’t think it’s a big problem… That’s politics,” says the man.

Oppenheimer knew after completing The Act of Killing, which focused on the perpetrators of the genocide in ’65, that a second film focusing on the plight of the survivors was in order. He’d met Adi in 2003 on an oil palm plantation that had been the focus of his film prior to Killing, The Globalization Tapes. Adi and others on the plantation were responsible for originally bringing Oppenheimer’s attention to the genocide, urging him to return to the country and speak to those responsible for it. Adi’s brother, Ramli, had been killed in the genocide in a manner that had differentiated from the norm at the time; his murder, unlike others, had been public, with his body left on the plantation for his family and the community to find. Word of the killing spread around, intimidating those in the area.

Having been born after the genocide, Adi makes a fitting subject for the film; he’s heavily affected by the events in ’65, but can suitably keep himself together while encountering those responsible. He extensively studied the footage shot for Killing, which included an interview with a man involved in the death of his brother.

Oppenheimer returned to Indonesia in 2012 to follow Adi and to explore those kept in silence. He shot the footage before Killing was released, as he figured that Indonesia would not be a hospitable place for him to travel around afterward. As the director notes on the film’s website:

Maybe the film is a monument to silence—a reminder that although we want to move on, look away and think of other things, nothing will make whole what has been broken. Nothing will wake the dead. We must stop, acknowledge the lives destroyed, strain to listen to the silence that follows.

The trailer closes with Adi speaking to a man involved in the ’65 killings.

“If I came to you like this during the military dictatorship, what you have done to me?” he asks.

“You can’t imagine what would have happened,” the man responds, looking troubled by the thought.

The film does not yet have a release date for the U.S., but, as noted by Deadline, has screened in Telluride, Toronto, and New York so far on the festival circuit.