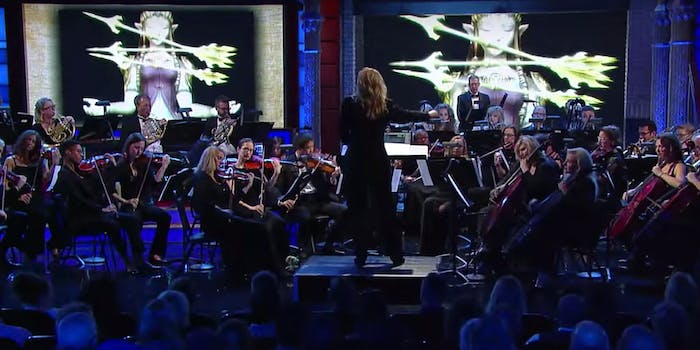 If you were a Zelda fan as a child, this segment will bring it all back to you.

It’s not everyday that a tune you listened to on repeat as a kid ends up on The Late Show.

The Legend of Zelda: Symphony of the Goddesses is a 74-member orchestra that has toured the world playing music from The Legend of Zelda’s nearly 30-year catalog. In honor of the upcoming Nintendo 3DS game The Legend of Zelda: Tri Force Heroes, Late Show host and avowed nerd Stephen Colbert—already a pioneer in booking guests who don’t normally appear on late-night TV—brought the entire orchestra onto his stage to play a medley of Zelda songs.

It’s both magical and majestic, and at the very least, it might inspire viewers to Google these performers and their impressive work.

But even before The Legend of Zelda: Symphony of the Goddesses took the stage, Colbert’s band leader Jon Batiste got in on the action backstage.

Batiste, along with Joe Saylor, Eddie Barbash, and Ibanda Ruhumbika of Stay Human, tried their hand at some Zelda music. It’s nowhere near the scale of the orchestra, but it still has plenty of charm—along with the 8-bit sounds we’re used to hearing when we play older Zelda games.