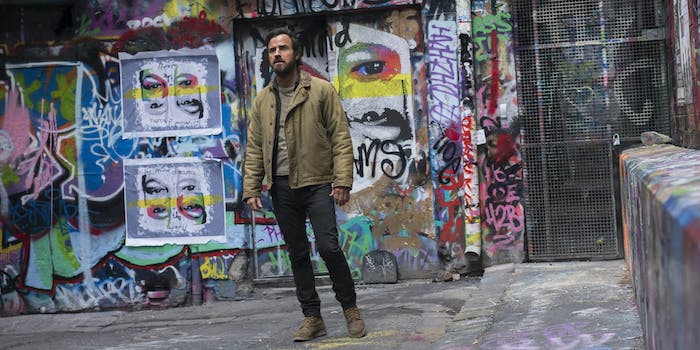 Warning: This newsletter contains spoilers for The Leftovers‘ first two seasons and up to the first two episodes of season 3. Catch up here with Streaming TV Party’s previous newsletters—and sign up to receive the best of the internet straight to your inbox.

If you’ve ever watched Wrath of Khan (aka the best Star Trek), you’re probably aware of the Kobayashi Maru, the infamous “no-win scenario” Starfleet cadets undergo while at the Academy. The point of the test is that it’s unbeatable, but it’s useful because instructors can see what kind of commander those cadets would be in that kind of scenario. “How we deal with death is at least as important as how we deal with life,” James T. Kirk explained. Kirk famously cheated to beat the Kobayashi Maru test; the rest of us would just lose.

For people like Nora Durst and the man Kevin Garvey Sr. encountered in the Australian outback, the outcome might be even worse than death. For a brief second, they were offered the chance to see their departed loved ones again; Nora even got a personal pitch from Mark Linn-Baker, who “went through” since he spoke to her. They both had to answer the question of whether they would give the go-ahead to kill a baby if it meant that their twin would eventually cure cancer. The man Kevin Sr. encountered answered no; Nora answered yes. They were both denied.

Is there a right answer? I don’t know. Maybe it’s a scam, as Nora later rants to Kevin. Maybe the machine is real. Maybe it’s a conspiracy by the Department of Sudden Departure. Maybe there’s an answer in-between killing the baby and not killing the baby, or we’re not just privy to the exact pass/fail criteria of the test. What it is is cruel. After they both failed the test, the man responded by driving off into the middle of nowhere and set himself on fire. Nora took a more self-destructive route. They were this close to reuniting with their loved ones, and the door slammed in their faces. Fun fact: That iconic shot at the end of “G’Day Melbourne”—in which sprinkler water runs down Nora’s face in a way that makes it look like she’s crying—wasn’t scripted. As director Daniel Sackheim told Entertainment Weekly, the water running down Nora’s face was a visual metaphor to depict the extent of Nora’s pain without having her actually cry.

Make the Mexican dinner of your dreams with help from the talented chef (and social justice advocate!) Gabriela Cámara.

Grace Playford, whose Sudden Departure story is as horrific as they come, is the newest depiction of grief on The Leftovers. After Grace discovered Kevin Garvey Sr. beneath the cross where Grace’s five children died years earlier with a page of what looked like scripture, she clung to it as if it was a message from God himself; she really believed the Rapture happened on Oct. 15, and her torn Bible page referencing Isaiah 41 affirmed that. (Oct. 15 is referred to as such in Australia because of timezones.) Nora’s grief is most tangible of all because we’ve spent the past three seasons getting to know her, and Kevin Jr. throws her inability to “move on” in her face during an explosive argument that doubles as the breaking point of their relationship.

We might not have had the Sudden Departure in our lives, but we’re more than aware of that kind of grief. We’re drowning in it daily six months into a pandemic with no end in sight and no tangible way to mourn it (because it appears to have no end); just compare how Erika and John Murphy are handling Evie’s death. But so many of us know it in other ways, whether it’s a family member, a friend, a pet, or a celebrity whose life or work touched you—and it never really leaves you. Even if you’re perceived to have moved on, grief has an uncanny ability to sneak up and worm its way back into your soul during the most inconvenient times—and there it stays.

We know exactly where Kevin, who also had the day from hell, is coming from. But also, of course, Nora hasn’t moved on. How could she ever?

Are the two Kevin Garveys prophets—or are they losing it?

Who’s the subject of The Book of Kevin? Kevin Sr. thought it was him, but as he eventually discovered, he didn’t get the edit he thought he would; aside from a single page that he stuck inside that National Geographic magazine (next to an article about Cairo), he trashed it. Matt Jamison and John Murphy focused more on Kevin Jr., but by the end of “G’Day Melbourne,” they’re in remarkably similar places.

As we saw in “Crazy Whitefella Thinking,” Kevin Sr. ended up in Sydney when the voices in his head stopped. He went from one place to another, following a message only he appeared to hear, that led him on a drug kick and following the advice of a chicken that led him to steal almost all of an Aboriginal songline to stop floods he believed were coming; he ended up with a poisonous snake bite. Despite his trip to Hotel Purgatory last season, some of Kevin Jr.’s delusions have returned in the form of Evie Murphy, who he believed was now in Melbourne holding a sign that read “Surah 81,” a rather apocalyptic verse of the Quran. Laurie indulged him until it was too late, a delusion she didn’t shatter because he was in the middle of a mental break.

Kevin Sr. and Kevin Jr. are lost souls when they reunite, although Kevin Sr. looks much more at peace. Has he found his purpose in Grace? Will Matt’s story about Abraham and Isaac (who was actually 36 when God asked Abraham to sacrifice him) come into play to stop the disaster they believe is coming? And does their fateful meeting with Kevin Jr. have anything to do with the explosion in Melbourne?

– Wonder what Dr. Eden and Dr. Bekker were saying in front of Nora during her assessment? Here’s a rough translation.

– Apart from that single page Kevin Sr. held onto, is this the last we’ve seen of The Book of Kevin?

– How would you fare if you were placed in a box full of packing peanuts and had to lay there for an undetermined amount of time?