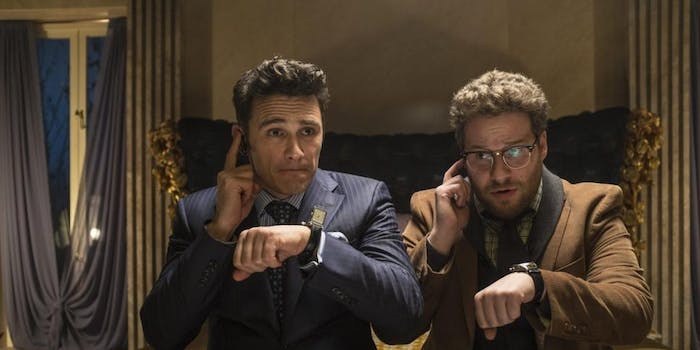 What people who actually saw ‘The Interview’ thought of the movie

Critical reception is mixed at best.

The Interview, the Seth Rogen and James Franco film that inspired an act of cyberwar on Sony from North Korea, isn’t coming out on Christmas day anymore. Sony killed the release on Wednesday, after American theater chains declined to show the movie in light of terrorist threats.

But that doesn’t mean no one has seen it. Actually, about two dozen film critics have laid eyes on the controversial comedy. The average consensus? Meh.

Overall, the critical reception to the new film, the plot of which centers around an assassination attempt on North Korean leader Kim Jong-un, has been lukewarm at best. Half of all the reviews aggregated by Rotten Tomatoes dislike the movie, half like it.

There isn’t much in the way of biting political satire, most of the critics agree. Rogen and Franco as a comedy team still pleases other critics, however, even if this is one of their less-well reviewed works.

If you don’t already love Rogen and Franco, though, this might not be a movie for you.

“Crude humor, weak jokes and an unpleasant mean streak,” is how Rafer Guzman at Newsday summed up his feelings.

“It isn’t just the most sophisticated and beautifully shot of Rogen’s star vehicles,” wrote David Ehrlich at Time Out New York, “it’s also the most giddily puerile.”

“Puerile” is Ehrlich’s way of saying, “get ready for a slew of anus jokes.”

In fact, there’s a butthole joke in the movie that sounds downright promising: North Korean television shields viewers from the revelation that Kim Jong-un has, like any commoner, a butthole. Childish? Sure—but America can always get behind a good politically-tinged ass joke.

Beyond the string of crude humor, many critics said The Interview fails to add up to more than the sum of its parts—not to mention failing to be worthy of generating a both a business disaster for Sony Pictures and a geopolitical standoff between the U.S. and the Hermit Kingdom.

“While The Interview never slacks in its mission to tell jokes,” Alonso Duralde wrote at The Wrap, “it’s such a messy and meandering movie that it never quite lands as a satire of politics or the media or anything else,”

The massive waves caused by the movie have the eyes of the world on Rogan’s latest work, Joe McGovern at Entertainment Weekly wrote, “and that’s why it’s a pity that the film is bereft of satiric zing, bludgeoning the laughs with a nonstop sledgehammer of bro humor.”

Some will love it, some will leave it, some will watch five minutes on cable if it ever makes it that far. In short, The Interview is fairly typical of other films from the Rogen-Franco camp.

Of course, the critical reception of a comedy doesn’t really matter when weighing terrorist threats against moviegoers. Would the Sony hackers laid off The Interview if it earned Rogen an Oscar nomination? Probably not.