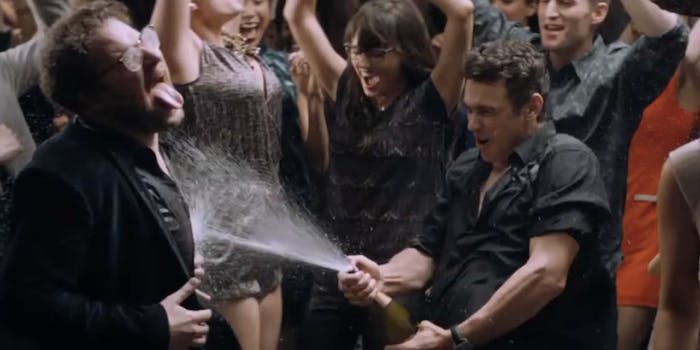 Sony releases ‘The Interview’ on YouTube, Google Play, and other platforms

Defying threats from hackers linked to North Korea, Sony Pictures Entertainment on Wednesday released its action-comedy film The Interview for digital purchase and rental through YouTube, Google Play, Xbox Videos, and its own platform.

Sony has set up a website, SeeTheInterview.com, where, beginning at 1pm EST, the movie can be rented for $6 and purchased for $15, both in HD. At press time, the website was down amid sustained traffic.

“Sony and Google agreed that we could not sit on the sidelines and allow a handful of people to determine the limits of free speech in another country,” Google’s chief legal officer David Drummond wrote in a blog post, adding parenthetically, “however silly the content might be.”

Our mission is to make the world’s information accessible—yes, even Seth Rogen movies. http://t.co/UihLmOJLwV

“It has always been Sony’s intention to have a national platform on which to release this film,” Sony Pictures Entertainment CEO Michael Lynton said in a statement. “We chose the path of digital distribution first so as to reach as many people as possible on opening day, and we continue to seek other partners and platforms to further expand the release.”

It's official: 'The Interview' will be available to rent or buy online starting at 1pm ET today pic.twitter.com/VOiq2bL1Ox

Apple’s iTunes is one of the major platforms left out of the arrangement. It reportedly passed on the opportunity to participate. Meanwhile, Netflix may join in the freedom party soon.

Given that the North Korean-set satire is the apparent MacGuffin in the United States’ first real cyberwar, it seems only fitting that it would find a home online after the five biggest cinema chains canceled their screenings. News broke on Tuesday that some 200 indie theaters will still show the movie on December 25, the film’s original premiere date, despite threats of 9/11-like violence from hackers who the FBI has said leaked troves of Sony’s data on orders from Pyongyang.

Observers have linked Sony’s ad hoc release strategy to President Obama’s assertion last Friday that Sony had made a “mistake” by appeasing those who wanted the film buried. In a different light, however, it looks as if Sony doesn’t want all of this free publicity to go to waste.