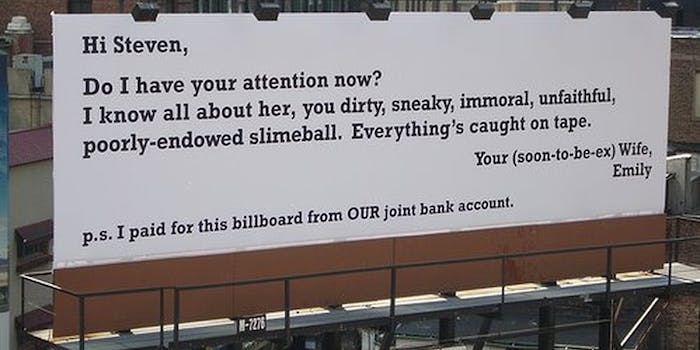 I blame Mark Zuckerberg for the new, stabbier News Feed.

My Facebook News Feed has gone from me, me, me, to meme, meme, meme.

But who’s really to blame? Facebook CEO Mark Zuckerberg and his band of merry user-interface “experts,” that’s who. While they’re laughing their way to a fancy IPO on Wall Street, we’re suffering the consequences of their bad decision last September to make everyone’s photos bigger in the News Feed.

Zuck and pals probably thought we’d all start posting glossier, high-def photos of our friends puking at parties. Wrong! We’re sharing fake news photos, content-free infographics, unverified quotes turned into GIFs, and the kind of stuff we mocked our parents for emailing in the early 2000s.

This needs to stop. There’s a reason I spam-filtered my boss’s “funny” story ideas and I don’t go to Reddit. We’ve seen this all before, and the only reason it seems fresh is it’s on Facebook.

That billboard of Emily “breaking up” with Steven that you location-tagged at some random New York intersection? It’s from 2006 and was to promote a failed television show on Court TV, a cable channel that doesn’t even exist anymore.

Andrew K. commented on the billboard picture, “I’m gonna have to go and see that in person.” Best of luck, bro!

That Lawrence O’Donnell spiel about liberals he wrote for a 2005 episode of The West Wing? Bless your heart, you’re so politically relevant!

Oh, and please post that ”soda” vs. “pop” linguistic map. It’s only been around since 2003. We Millennials were in middle school then, so we might have missed it!

And that poster of social-media sites showing where to brag about your urination skills isn’t as timely as you think it is. (For one thing, where’s Grindr?)

What we need is urban-legend-debunking geniuses Barbara and David Mikkelson to launch a Facebook app which automatically adds links to Snopes.com so we don’t have to. Servicey!

Then we could get back to rolling our eyes at all the overshared Path photos and boring Spotify tunes and precious Foodspotting lunch pics (look, no carbs!) that Facebook was meant for.

Leave the visual memes to Reddit, so I can keep living in my peaceful bubble.

Photo via some idiot