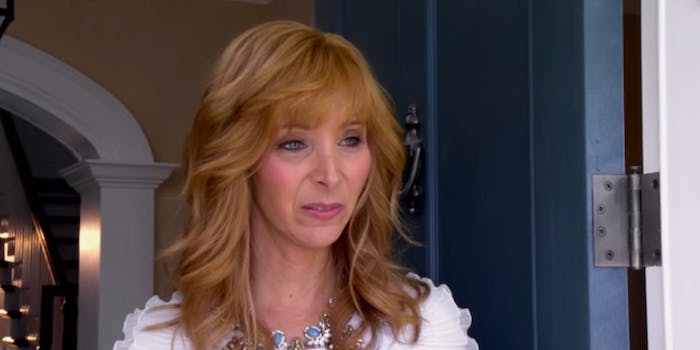 5 reasons why you should be watching ‘The Comeback’

Lisa Kudrow might be the best thing on TV right now.

The most meta show on television is back. After nearly a decade-long hiatus, Lisa Kudrow and Michael Patrick King’s hilarious creation, The Comeback, is in the midst of its second season on HBO. Valerie Cherish (Kudrow), the show’s protagonist, is holding on to her corner of the limelight with as much of a death grip as ever, and she still wants you to notice her perfectly manicured nails.

If season one was keenly aware of the challenges of being an aging “it girl” in a society that exalts youth, season two shows Valerie navigating the challenges of keeping up with an ever-evolving fame machine.

Here are five reasons to log on to HBO Go and binge-watch the first three episodes.

1) All your friends are here

The first two episodes reveal Valerie landing a role in a new HBO dramedy about the trials and tribulations she endured in season one. All the characters who made that season a riot are back. Paulie G. (Lance Barber), now in recovery for heroin addiction, is the creator and director of the show-within-a-show; Mickey (Robert Michael Morris) is in tow to cheer for Valerie and style, but not “place,” her superfluous wigs, all of which are dead-ringers for her real hair; and Jane (Laura Silverman) is a darker, crisper version of herself from season one. She has an Oscar under her belt for a documentary about “lesbians in the Holocaust,” and she wears her disillusion and skepticism like heavily smudged eyeliner.

While Paulie G., who reluctantly casts Valerie in his new venture, grumbles and fumbles his way through apologies and outbursts, Valerie’s husband, Mark (Damian Young), begs her to get out of the spotlight, and unwittingly deflates her hopes. Even Juna (Malin Akerman), the kind starlet who outshone Valerie on Room and Bored, makes a cameo where she reminds us that Hollywood loves the young and doe-eyed, but wants to show you the door before you start to wrinkle. The characters are sharply drawn and superbly real.

2) It might be the most feminist show on television

Valerie waltzes into a meeting at HBO ready to claim her part in Paulie G.’s project. And certainly she has a right to: He’s scripted her into the project without her permission. But what starts as a bold move to stand up for herself—albeit one motivated by her desire to create some juicy reality TV for her own project—quickly spirals into an off-the-cuff audition. Fueled by real anger and nerves, Valerie delivers an alarmingly moving monologue:

“You think I’m this dried-up, middle-aged woman. Look at the jokes you write, look at the track suit you make me wear—all saying the same thing: I’m old, I’m annoying, I’m un-fuckable. Well, I’m not the joke, OK? You are, Mitch. And instead of spending all your time trying to make me the joke, why don’t you do your job and write me one? Huh? A real joke, Mitch. Not you and your boys off in a room making fun of an old woman’s pussy. Yeah, I heard you. I heard what you think of me. I heard it. Well, maybe you and everyone in television—oops, said it wrong—well, maybe you and everyone in the television business can’t see me as desirable, but there are plenty of men out there who… but there are plenty of men out there who would still wanna… fuck an old lady like me. So fuck you, Mitch. Just fuck you, and FUCK YOU!”

Valerie delivers Paulie G.’s words with real anger, real venom, and still wavers, because she still wants to get it “right,” to be the kind of woman who is perfect for the part. The resulting scene is an indictment of everyone who calls on women to be this way or that, Valerie included, and it vibrates with the kind of clarity rarely achieved in discussions about what it means to be a woman in today’s world.

3) The guest stars are the best

At one moment in the season premiere, Valerie remarks that reality television has evolved: “And I should know, because I was there at the beginning. With The Comeback. Back then it was just me and people eating bugs on Survivor.” Valerie has flubbed her chances to rub elbows with the reality TV elite, as we see in a series of botched interactions. Real Housewives star Lisa Vanderpump and Drag Race guru RuPaul are among the delightful celebrities who pop up as themselves in the premiere. Vanderpump is charming and composed in a dramatic made-for-reality-TV confrontation gone awry. And the Bravo star’s presence buoys the joke, as Valerie storms off set and cries, “It’s not Housewives of New York. Beverly Hills? This isn’t gonna last. Housewives of Beverly Hills? Not one of us even lives in Beverly Hills!” RuPaul is brilliant, as usual, when Valerie attempts to corner Andy Cohen at an upscale restaurant where the two happen to be lunching. The Curb Your Enthusiasm levels of awkwardness that ensue are the best kind of cringeworthy.

4) It will make you feel the feels

Val’s seeking fame and status in a world where media has morphed and become more complex and multi-tentacled than she ever could have predicted. She still wants fame and admiration, but she also wants you to know that she is in the know.

One of the most entertaining offshoots of Valerie’s quest for “with it”-ness is her Twitter account. Although not featured or referenced in The Comeback, the account has been around since June 2011, and the tweets range from nods to Valerie’s favorite new reality TV stars (she loves Bethenny Frankel) to a peek at her most recently used emoji (she uses the smiling turd). Here are some of the best gems in the bunch.

How do you buy followers on the twitter? I'm not asking for me. #dignity

I filibustered once in a Lifetime movie.