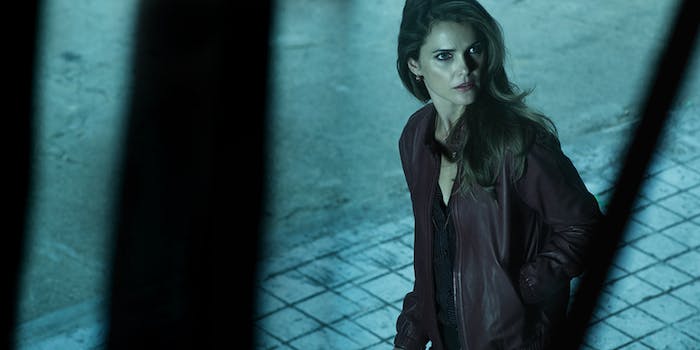 ‘The Americans’ returns for season 3: Get excited with these 4 real Russian spy tales

Sometimes, truth is stranger than fiction.

The Americans, which begins its third season on Wednesday night on FX, is one of the best TV shows you’re not watching. Despite solid acting, snappy writing, and tense, compelling family and political drama, the series has flown under the radar almost as much as its main characters, a family of Russian spies posing as U.S. citizens.

One of the best parts of The Americans is how extensively its stories, props, and characters are grounded in real events. Its creator, Joe Weisberg, used to work for the CIA, and he brings to the series a deep understanding of how the U.S. government really did root out Russian spies embedded in America.

FBI and CIA efforts to catch so-called “illegals” operating at the direction of the Kremlin began at the outset of the Cold War, but these counterespionage missions continue to this day. With The Americans preparing to kick off its third season, here are some of the most famous spy-ring busts that mirror events on the show.

The Justice Department announced espionage charges against 11 people, 10 of whom the government had in custody, on Monday, June 28, 2010. The official charge was “conspiring to act as unlawful agents of the Russian Federation within the United States,” but the DOJ press release spelled it out more clearly in its opening line, calling it “long-term, ‘deep-cover’ assignments.” 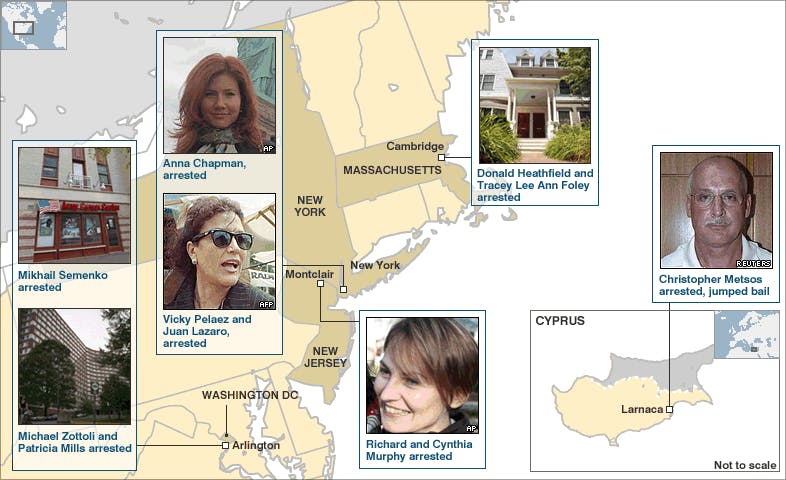 As soon as the arrests were announced, the media began pouring over the profiles of the alleged spies. Almost immediately, the world seized upon a beautiful then-28-year-old woman named Anna Chapman. The New York Post called her “the spy ring’s ‘femme fatale'” and “a flame-haired, 007-worthy beauty.” Chapman’s husband, who was apparently unaware of his wife’s secret deeds, told the Telegraph, “It made sense because of all her erratic behavior, all these high society people she was going on about.”

““Her father controlled everything in her life,” Chapman’s husband added, “and I felt she would have done anything for her dad.”

This high-profile spy-ring bust actually served as the inspiration for The Americans. The beautiful and cunning Elizabeth Jennings (Keri Russell) borrows many of her mannerisms and strategies from Anna Chapman.

In late 2011, the government released many of its records from “Operation Ghost Stories,” the FBI’s official name for the counterespionage operation that nabbed Chapman and her compatriots. “The arrests of 10 Russian spies last year,” the FBI said, “provided a chilling reminder that espionage on U.S. soil did not disappear when the Cold War ended.”

The FBI’s 2010 investigation led, over the next four years, to a separate set of arrests announced just this week, on Monday, Jan. 26. The three men, who operated out of New York City, allegedly tried to recruit others to their cause and steal secrets about the New York Stock Exchange and U.S. sanctions against Russia.

On The Americans, most of the secondary Russian characters in the U.S. officially work at the Russian Embassy, which has a section called the rezidentura for coordinating undercover operations. In the spy ring that the government busted this month, one of the men, Evgeny Buryakov, “pos[ed] as an employee in the Manhattan office of a Russian bank.”

Russian embassy employees use their diplomatic cover to hide many of their illegal acts, but at least the U.S. government knows that those employees are working in the country. As the DOJ pointed out in its press release, Buryakov didn’t register as a foreign agent, which embassy employees must do, because he arrived as a private citizen.

“Agents operating under such non-official cover,” the government said, “typically are subject to less scrutiny by the host government.”

A secret agent and a hollow nickel

The fall of Soviet spy Rudolf Ivanovich Abel, who lived in New York City under the name “Mark,” began with a hollow nickel. In June 1953, a newsboy received the nickel while making his rounds, and upon dropping it, he discovered that it contained a tiny piece of paper with numbers on it. 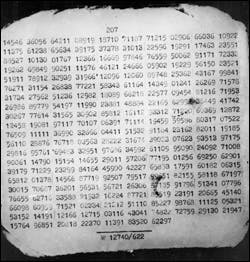 A four-year investigation by the FBI, with the assistance of KGB defector Reino Hayhanen, eventually led to Abel, who was arrested while in possession of a “shortwave radio, paint tubes and technical books, along with hollowed-out pencils, tie clips, nails and coins for microfilm containers.”

Abel used the alias “Emil Goldfus” in the Brooklyn Heights artist community. One of his longtime friends there, Burton Silverman, told the New York Times, “There was something very convincing about him in that setting.”

In 1962, the U.S. government traded Abel back to Russia in exchange for Francis Gary Powers, the Air Force pilot whose U-2 spy plane had been shot down two years prior.

The woman who fooled Einstein

Albert Einstein was a veritable genius, but even he wasn’t immune to feminine wiles. Russian spy Maria Konnenkova took advantage of this fact by dating Einstein in the 1940s in order to learn about the Manhattan Project.

“Most Russian female spies were very beautiful, charming, well-educated, sly, and used good logic,” Lyudmila Mikhailova, a Russian museum director, told the Moscow Times on the occasion of an exhibit about the Soviet Union’s undercover women.

Like most Soviet spies, Konnenkova didn’t happen upon the profession by accident. Instead, she was recruited. KGB agent Yelizaveta Zarubina, whose husband was famous spy-ring leader Vasily Zarubin, picked Konnenkova to join the effort, presumably for her combination of brains and good looks.

“The Zarubins, who played key roles in obtaining the secrets of the U.S. bomb for the Soviet Union, were probably the biggest family of Soviet spies,” the St. Petersburg Times declared. “Both of Zarubin’s wives and his daughter worked for the secret services.”

If you’re familiar with the season 2 finale of The Americans, that family-tradition aspect of the KGB’s “illegals” program will strike a chord with you.

The third season of The Americans, featuring drama and tactics inspired by real-world events like these, premieres on Wednesday, Jan. 28 at 10pm ET on FX.