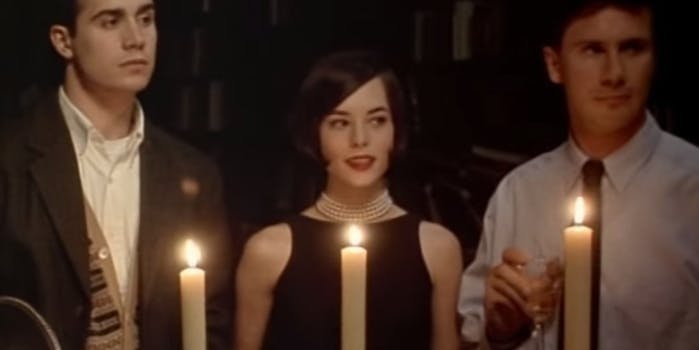 The most insane Thanksgiving movies on Netflix Streaming

Ditch your family for this weird cocktail of Thanksgiving-related 'Flix flicks.

In the spirit of Thanksgiving, I decided to compile a list of the most insane movies related to the holiday that could be found on Netflix Streaming, which turned out to be every movie that was neither animated or Planes, Trains & Automobiles. Then, like any good holiday bender enthusiast, I binge-watched them.

Speaking of Planes, Trains & Automobiles, this first movie on the agenda was Dutch, a movie written and produced by John Hughes and directed by Peter Faiman. It’s about Dutch Dooley (Ed O’Neill) picking up his girlfriend’s (JoBeth Williams) adolescent son, Doyle, (Ethan Embry) from a private school and driving him home for Thanksgiving. The kid’s biological father is a huge jerk, and the screenplay gets over having to explain this by just casting Christopher McDonald and letting his face handle the exposition. All the pieces are in place here for a Thanksgiving classic (it’s basically a quick rewrite of Automobiles), but something must have been amiss behind the scenes. My bet is that Hughes had a problem with over-the-counter cough syrup when he was writing the screenplay.

Though not directed by him, this is unmistakably a Hughes movie—all the moonlight is purple, every car is either a Buick or a Peterbilt semi-truck, nobody ever looks at the road while driving, and it uses that classic comedy formula: (plot + funny thing happening three times in a row) * 4 = movie. But this movie feels like it’s 600 minutes long. At least 200 minutes are Dutch doing things that make no sense to try and win the affections of Doyle. He shuffles a pack of racy playing cards around in his Buick while jazzy funk music plays and he keeps eye contact with the kid for what seems like 30 minutes. Nothing. He shoots off a whole bag of fireworks in the snow in another montage that’s somewhere between 30 and 40 minutes long. Nothing. At one point (around the 200-minute mark), he kicks Doyle out of his Buick and makes him walk 50 miles to the motel. This gets a response, but that response is Doyle faking his own death by stealing Dutch’s Buick and parking it in the street, where it’s hit by a Peterbuilt, which probably wouldn’t have happened if the driver had been looking at the road.

About 300 minutes of the movie consists of Dutch and Doyle discussing the working class, and a bonding moment occurs between the two after they’re robbed by call girls they’ve hitched a ride with. It feels like this was maybe Hughes’s Bad Santa, the screenplay where he was finally going to just go bananas, but it never made it to theaters that way. Somewhere some really dark, R-rated material was crudely hammered into a PG movie and logic was lost in the transition. This is literally the film’s dialogue during that change of heart scene, when the titular character reminds Doyle that they’ve been robbed by call girls and can’t get home:

Dutch: This isn’t working out. We’re not masters of the highway. We were robbed by homebound hookers.

And then they high five, and that’s it. I had to watch it five times to make sure I wasn’t hallucinating. It’s the film’s big turning point, and a whole line seems to have been edited out with nobody caring that it reduced the scene to nonsense. In some film archive, somewhere, there is footage of an adolescent Ethan Embry telling Ed O’Neill that he received a hand job in the back of those girls’ Camaro, and it will be discovered and a great GIF will be made. As it stands, though, this is the only movie on the list that’s even close to receiving a blanket recommendation for suitable family viewing, and it’s worse off for it.

SPOILER ALERT: The movie ends with Dutch teaching Doyle’s biological father a lesson in parenting by punching him in the forehead, sending him on his way to drive home severely concussed in the snow, and then going to inside to shoot Doyle in the ass with a pellet gun. It’s a pretty solid ending.

After the watered-down Dutch, I needed to go straight to the movie on my list that was put out by Troma, the nation’s longest-running independent film studio. As with all their in-house productions, it’s directed by Lloyd Kaufman (look for him among the prisoners in Guardians of the Galaxy; James Gunn got his start with Troma) and takes place in Tromaville, a land where every wall is a blank canvas awaiting the spattering of bodily fluids, and where a positively disproportionate number of citizens have their nipples pierced.

Poultrygeist revolves around the opening of a new fast food joint in Tromaville that serves fried chicken. Of course, it’s built on an ancient Indian burial ground—which allows both a lot of chicken-zombie stuff to happen, and also ample opportunity for Troma to be offensive toward Native Americans. Within the first five minutes: a woman is topless, a zombie puts its finger in a guy’s butt, a pantsless man masturbates, the man’s guts are ripped out by zombie (through his butt), and the main character says, in utter sincerity, “Wendy, my mom’s a retard and my dad’s blind!”

This is a punk rock movie: a movie that hates everything and everybody, with a budget somewhere around the cost of that purple light used in every night scene in Dutch. It’s also sort of a musical, with a few song and dance numbers thrown in the film that are, in all honesty, extremely catchy.

I can’t safely recommend this movie under any sort of guidelines whatsoever. There are maybe 200 total frames in it that aren’t offensive in one way or another; it’s a bit of a marvel, really, and if offensiveness weren’t so subjective, this movie would hold a place in the Guiness Book of World Records for being the most consistently offensive movie ever made. Even as an atheist, it makes me kind of scared, spiritually, that I loved watching it.

FUN FACT: Despite being on Wikipedia’s list of Thanksgiving-themed movies, Poultrygeist actually has nothing to do with Thanksgiving, proving that a user-edited encyclopedia will always be vulnerable to classic Troma marketing strategies.

And now, onto the only film on this list to have competed at Cannes. It’s tough to be humorous with this one, because it’s just really good, which is probably why I’d never watched it before. “It’s just really good,” is kind of a hard sell for a movie, but that’s what people usually have to say about The Ice Storm.

Directed by Ang Lee, the movie opens with Tobey Maguire reading an issue of The Fantastic Four. The fact that Lee and Maguire would both go on to be involved in film adaptations of Marvel films is all the proof I need to confirm that Lee does, in fact, have supernatural abilities. This film also reinforces the idea that the best films about America almost always come from foreign directors making period pieces.

Storm takes place over a small town’s 1973 Thanksgiving, where all the adults, and their kids, are getting restless to the point of complete societal destruction. The news is saying that a terrible ice storm is on the horizon, so, naturally, every character leaves home in order to be in a really awkward situation. The film solidified Christina Ricci’s role as the 1990’s avatar of realistic female adolescence; and, by placing them both in the same film, made audiences finally realize that Tobey Maguire and Elijah Wood were different people. It has some of the most realistic sex scenes ever filmed in that they are painfully sad and awkward.

I’m not sure I’d recommend watching this movie with people. It’s the kind of movie you watch alone, that you take a soul journey into the woods to watch.

This was the fourth and last movie on my binge list, and my brain was fried enough to respond to seeing Josh Hamilton in the credits by thinking: oh, cool, the former Texas Rangers outfielder is in this. It’s a movie about an unstable woman (Parker Posey) living in a mansion with her mother and brother (Freddie Prinze Jr.), and her brother (Josh Hamilton; not the baseball player) coming home for Thanksgiving in 1983 with an unexpected fiancée (Tori Spelling).

Thirty minutes into this movie, I was convinced it would be the only good movie on this list that I could broadly recommend for family viewing. Based on a play by Wendy MacLeod, the dialogue was silver-tongued, but void of cursing; it was the sort of cynical thing that even Grandma could enjoy. Alas, halfway through the movie it’s revealed that SPOILER the whole dramatic dynamic hinges on past incest between Posey and Hamilton’s characters, which was a big relief to me, because I’d started worrying that this film wouldn’t qualify for this list at all.

As previously mentioned, the dialogue in this movie is consistently great; and when you combine that with the fact that it has the best dad joke ever told (go to the 68-minute mark for it), it’s really disappointing that it isn’t a better movie overall. It’s clear that the story originally contained a strong feminist message, with a story involving two twins sharing a sinful act that results in the destruction of the female’s mind and leaves the male unscathed (at one point, the dialogue even revolves around some yellow wallpaper in the mansion). Sadly, the film version of this story decides to focus more on the This Woman’s Crazy angle than the feminist one.

In the end, I’m pretty sure the message of the play was slightly different than that of the film, which can only be interpreted as “don’t bring anybody home for Thanksgiving, ever.” It has great music, though. And the actors are all fantastic. Even Freddie Prinze Jr.