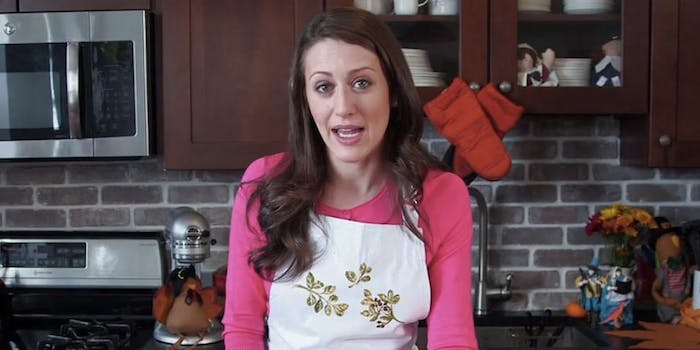 There is no crying in Thanksgiving dinner prep.

Well, in the case of chef/comedian Julianna Jones, we can make an exception. In her video, Cooking for One: The Crying Chef, we hear a tale of woe as this Tampa, Fla. native evokes sadness as she is forced to spend Thanksgiving away from friends and family. “Getting home for the holidays is not always easy and not always possible,” Jones mockingly moans as she spatchcocks a poussin (baby chicken) on a layer of aromatic vegetables.

The four-and-a-half-minute segment has a split personality. Jones is quite skilled as a cook and tackles her solo feast with proper technique which is spelled out with little onscreen cards. As a jokester, when she turns to the camera in aside mode, the webisode falls flat. Making a double entendre over using a spatchcock method of cooking, she turns and says,  “That’s going to sound dirty… that’s going to sound raunchy… so the dirtiest thing we’re going to do today is oil some breasts.” Wink, wink.

There’s also a sight gag that is a major fail. Showcasing a family heirloom dinner plate Jones stole from her mother, that she intends to use as a serving vessel, everyone can figure out what comes next—crash, it lands on the floor in several pieces. Every comedian knows timing is everything.

Jezebel says this Thanksgiving segment is the first episode of The Crying Chef; one can only imagine what sadness is in store for Valentine’s Day.