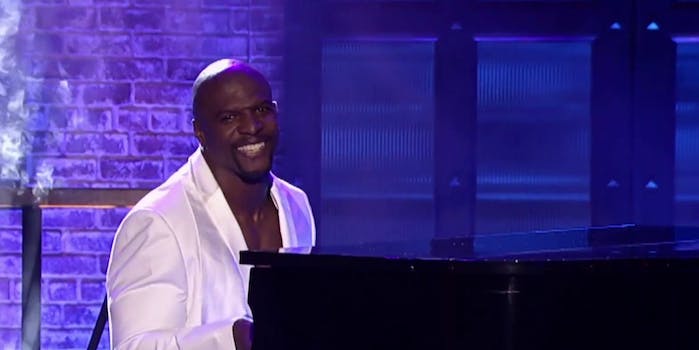 He still loves that song.

It was muscle overload on last night’s episode of Spike TV’s Lip Sync Battle as Terry Crews faced off against former heavyweight champ Mike Tyson. Both contenders managed to get their punches in: Tyson struck with the Rolling Stones’ “Satisfaction” and Salt-N-Pepa’s “Push It,” and Crews hit back with Run DMC’s “Sucker MCs.”

But it was Crews’ homage to his turn in White Chicks that stole the match, as he graced a grand piano for his rendition of “A Thousand Miles” by Vanessa Carlton.

Crews—who is my fitness hero, second only to The Rock—took this as another opportunity to show off his physique, as he threw off his jacket and knocked out the audience with his signature move, the “Pec Pop.”

Terry Crews won the match floating like a butterfly (I mean, look at how he dances with that ribbon as though it’s an extension of his body) and stinging like a bee (Pec Pop). But even if he didn’t defeat “Iron” Mike, he would still be the champ of being hella awesome.